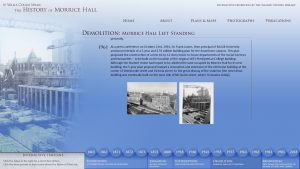 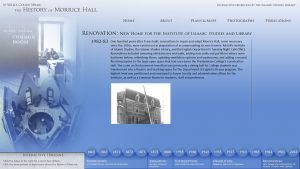 1982-1983
However, the remaining part of the College, Morrice Hall, survived the campus changes and remains standing today as it did in 1882. Renovations to repair and adapt Morrice Hall were carried out in preparation of accommodating its new tenants: the Institute of Islamic Studies (IIS), the Islamic Studies Library (ISL), and the English Department’s Tuesday Night Café Theatre (TNC). Once these were completed, in 1983, the IIS and ISL – then occupying a space in the Leacock building – moved into the building where they still are today.

McGill Daily: volume 51, number 22, October 24th, 1961.
McGill’s expansion plan that results in the demolition of the original College building, and construction of Leacock, is annonced.

McGill Daily: volume 51, number 23, October 25th, 1961.
Page one includes an image of the expansion plan proposed for McGill campus, including the Leacock towers, while students discuss the proposal for the new Union building in “Latest or Last?” on page 2.

McGill Daily: volume 51, number 28, November 1st, 1961.
This entire issue is devoted to discussion of the location of the new Union building and includes an aerial photo of campus on the first page; Morrice Hall and the original College building are seen in the lower right of the photo.