In addition to digitizing the McGilliad we have also recently put online the full run of 18 issues of the McGill Fortnightly review.

McGill Fortnightly review was founded by F.R. Scott and A.J.M. Smith as an independent undergraduate journal after it was announced that the Students’ Council couldn’t support the publishing of the McGill Daily Literary supplement which is detailed in the first issue editorial. The student publication ran from 1925-1927 and featured modernist poetry and prose. 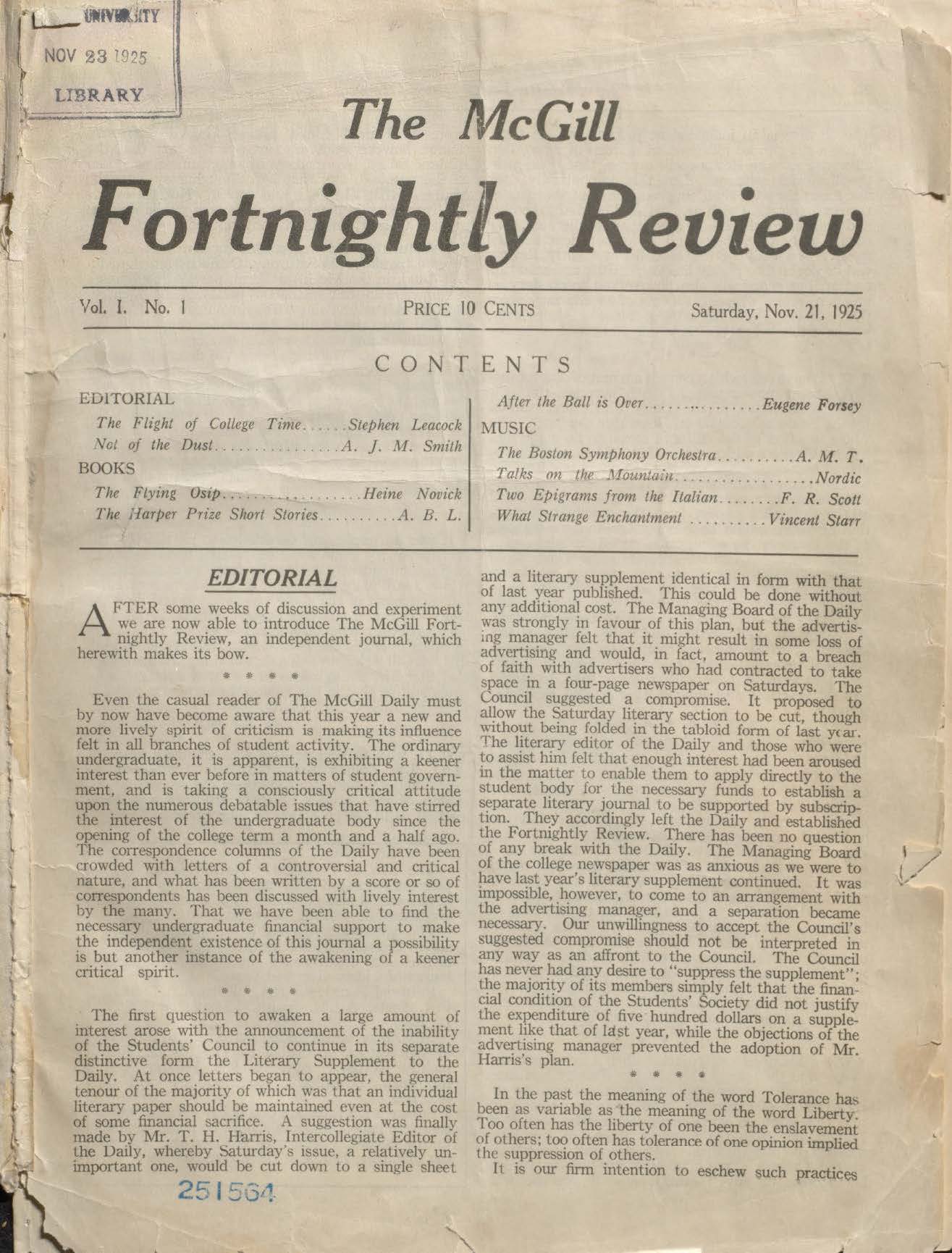 Front page of the The McGill Fortnightly Review first issue from 1925. http://mcgill.worldcat.org/oclc/428073817

Read more about the  McGill Fortnightly review in Ken Norris’ 1980 English thesis “The role of the little magazine in the development of modernism and post-modernism in Canadian poetry” which is available online in our institutional repository, eScholarship.

You can download all of the issues from our catalogue or you can see the original by visiting the Rare Book and Special Collections reading room during opening hours.

When this map of the Montreal harbour came to us it’s small 11 x 15 cm cover hid a map that measured over 96 x 31 cm when unfolded. Too delicate to weigh down we shot this with our Betterlight 8K medium format camera. With a full image size of 9426 × 3352 pixels when you extract a JPG from the PDF you can get some really nice detail.

You can download the map from our catalogue or you can see the original by visiting the Rare Book and Special Collections reading room during opening hours.

Close of Lachine Canal from the Plan of the wharves in the harbour of Montreal, 1877. Montréal: Printed by] the Burland Desbarats Co.

Harbour Commissioners of Montreal., & Kennedy, J. (1877). Plan of the wharves in the harbour of Montreal, 1877. Montréal: Printed by] the Burland Desbarats Co. 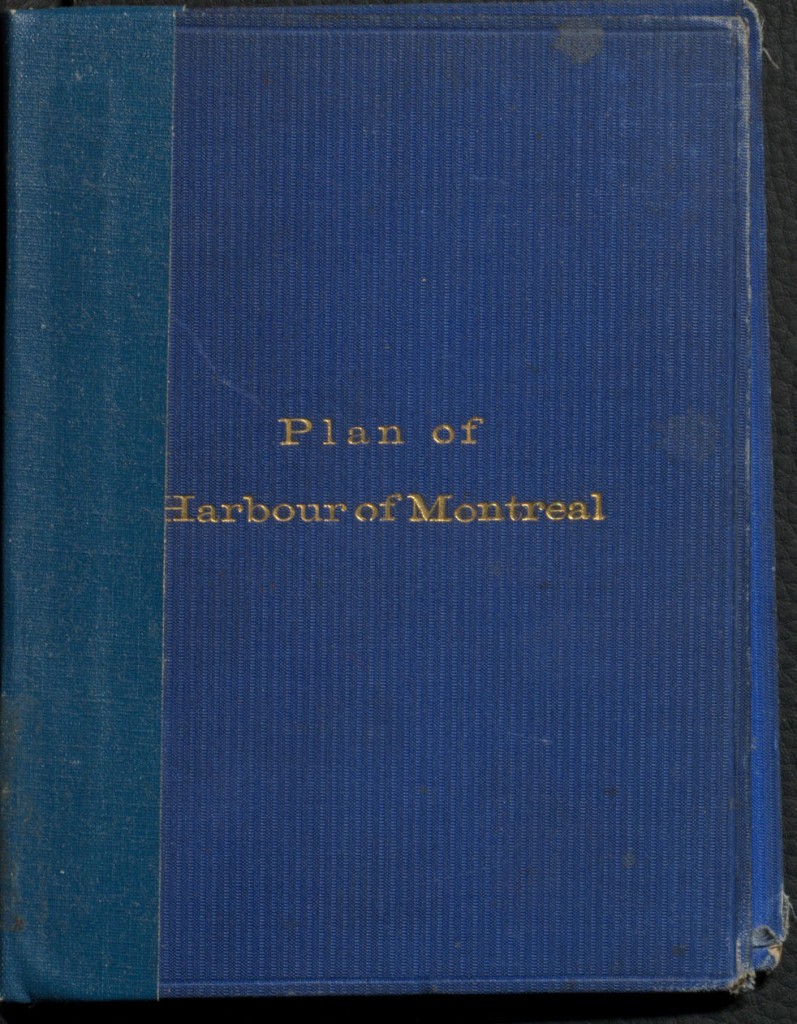 Cover of Plan of the wharves in the harbour of Montreal, 1877. Montréal: Printed by] the Burland Desbarats Co. 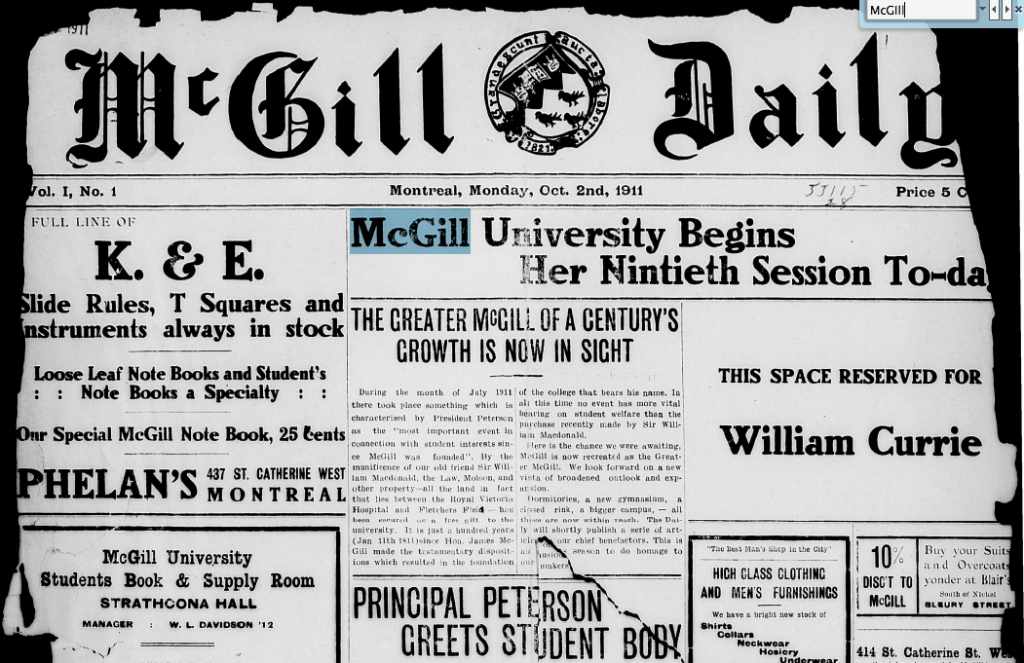 The McGilliad was a periodical published by the Arts Undergraduate society of McGill University from 1930-1931. According to the first issue editorial the periodical was started because some sutdents

… feel the need for some forum where they (the students) can exchange their intellectual and emotional experiences, where they can present to their fellow-beings their clarified conception of some bewildering phenomenon or some haunting passion. And it is to fill this need that the “McGilliad” makes its appearance.

The first year they published two issues in March and April of 1930 under the editorial direction of A. M. Klein.

In November 1930 publication resumed under the direction of David Lewis. In the last issue of our collection, Volume 2 Issue 5, the editorial happily announced that the Students’ Council had “definitely taken the journal under its jurisdiction. The “McGilliad” is now a legal student activity, resting on a basis of sound and lasting security.”

You can read and download all seven issues from our catalogue or you can see the originals by visiting the Rare Book and Special Collections reading room during opening hours. 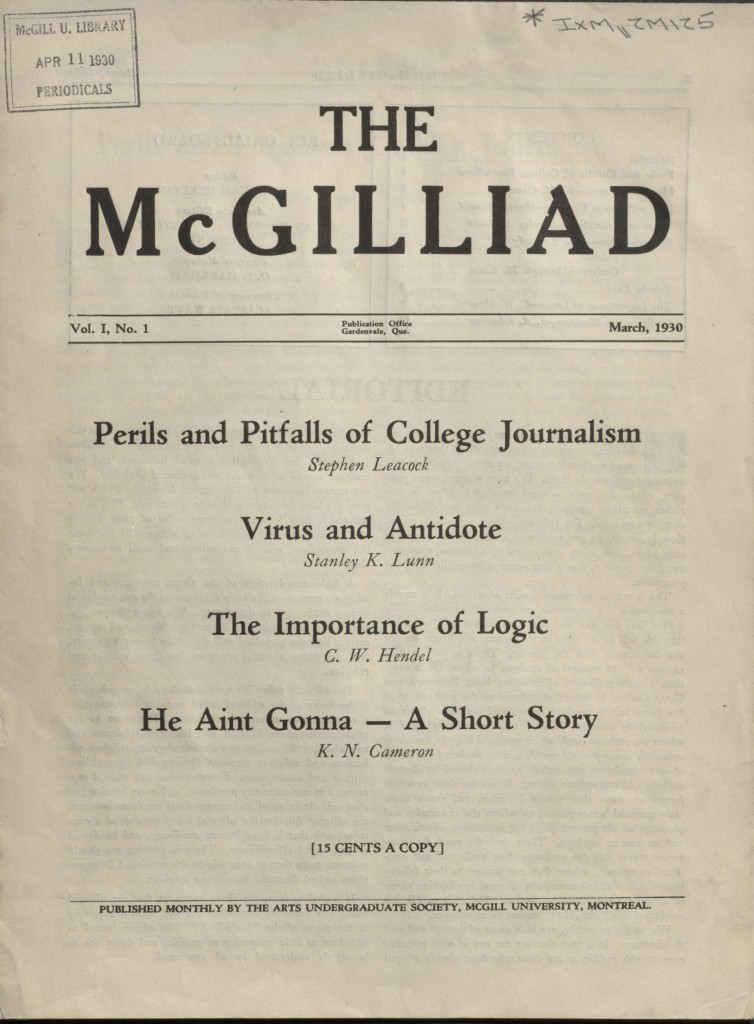 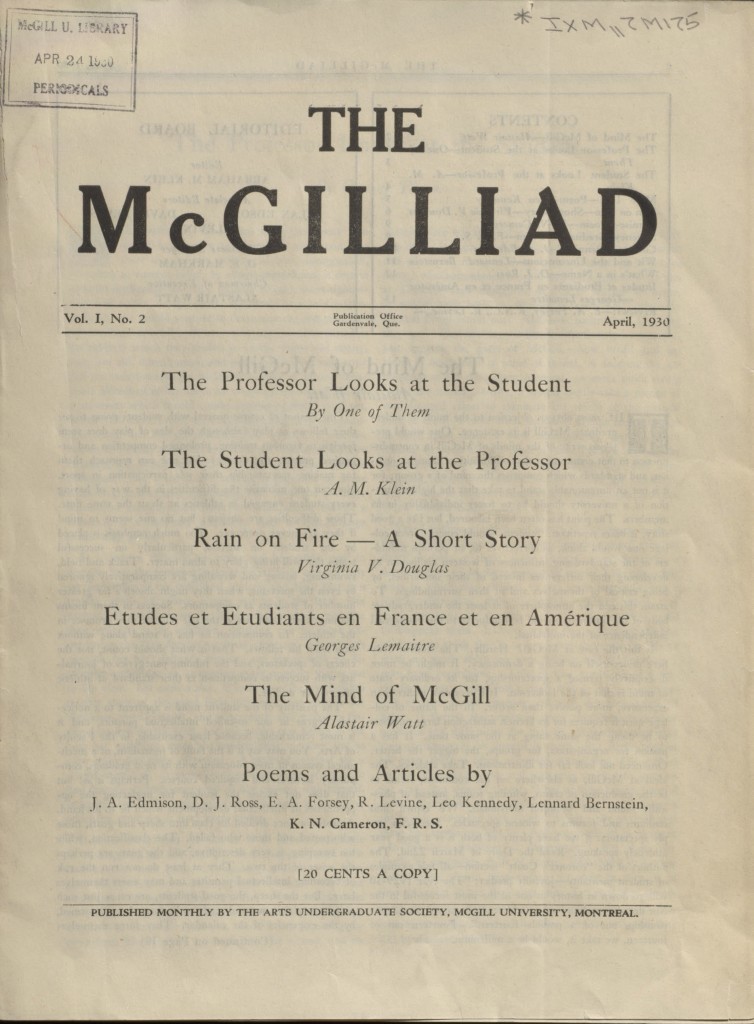 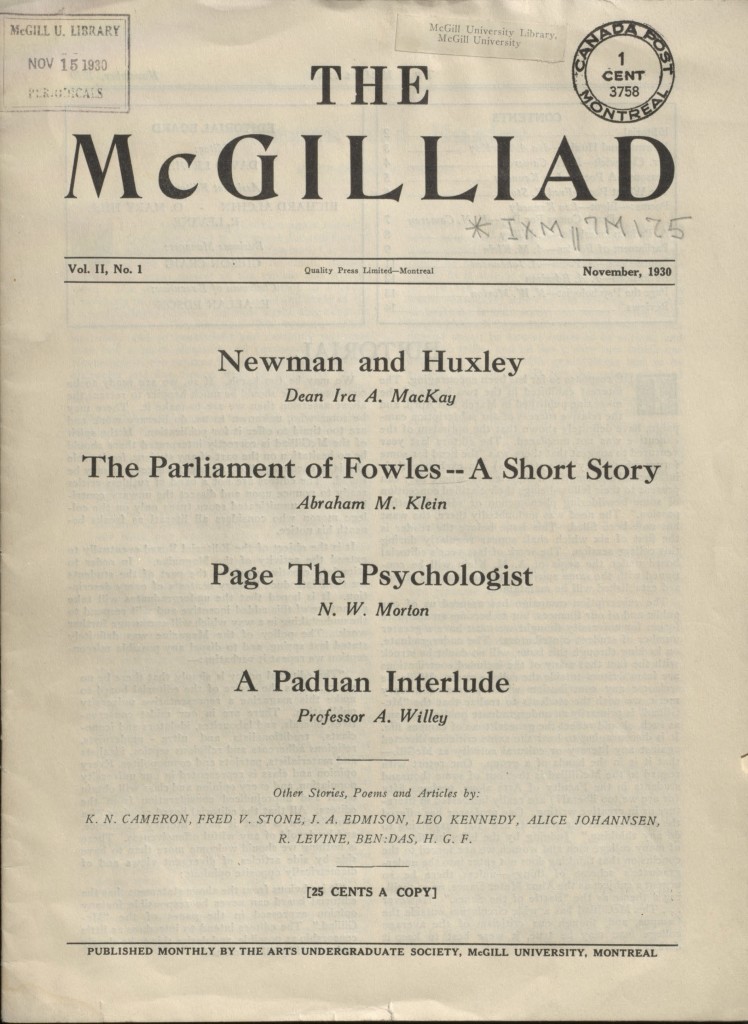 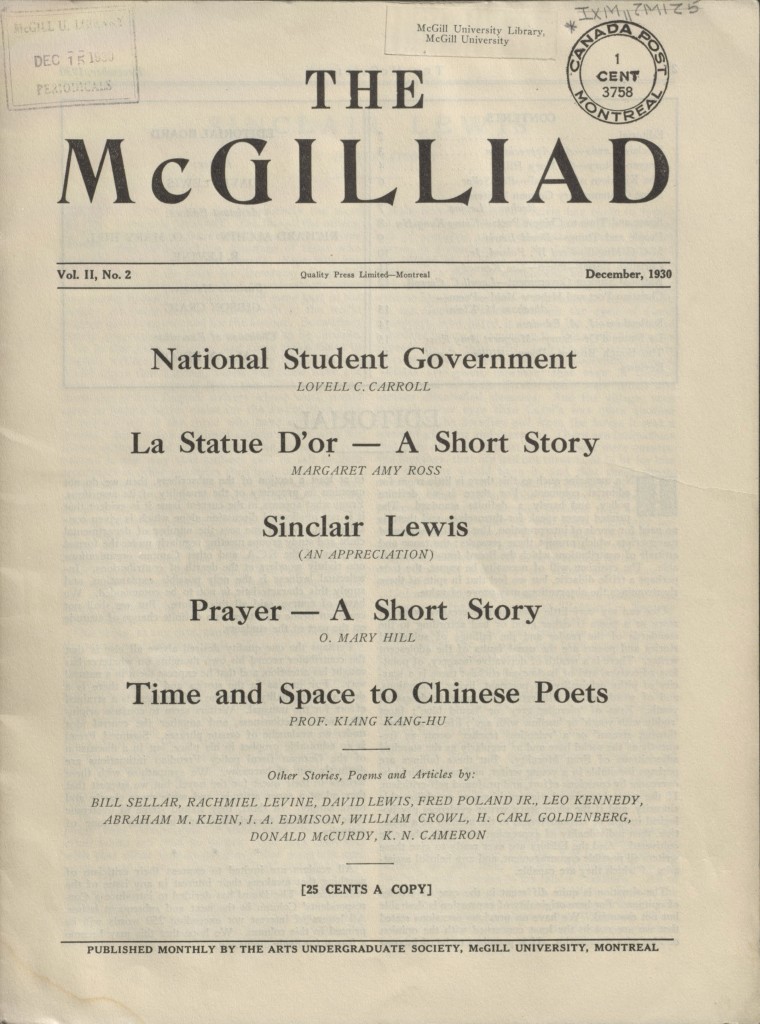 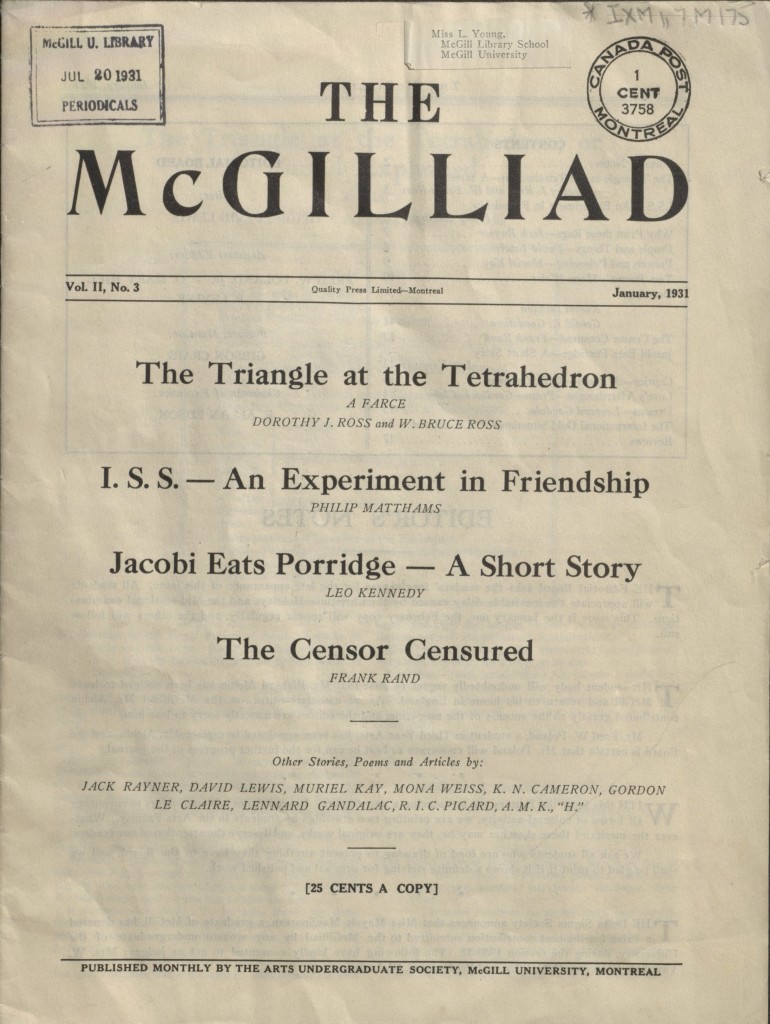 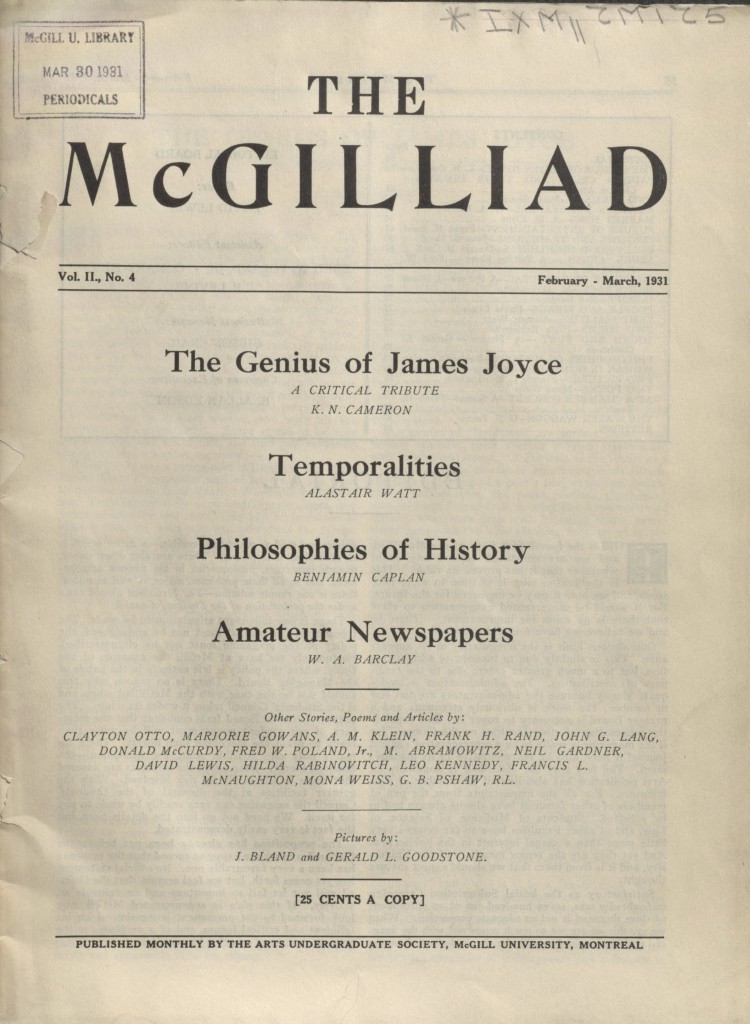 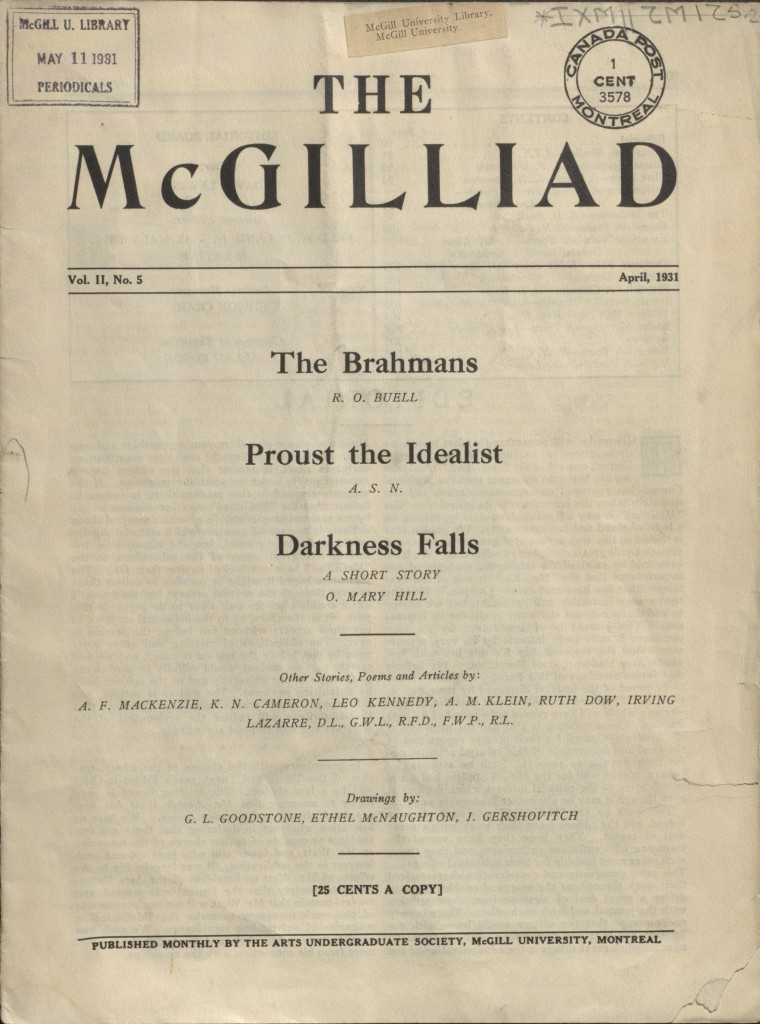 You can download a full resolution version from our catalogue or you can drop by anytime during Rare Books and Special Collections opening hours to consult the original. Digitization at the McGill library is provided as a research service so it’s always a pleasure to see our work in scholarly publications. Recently a special collaboration between the Rare Books and Special Collections librarian Ann Marie Holland and our own digitization administrator Jennifer Innes helped get over 20 images from our collection into the beautifully illustrated Destination Québec: Une histoire illustrée du tourisme by Marc H Choko, Michèle Lefebvre & Danielle Léger.

To give you a peak at some of our contributions I’ve posted a small subset but it’s worth picking up the book for the almost 350 images they have pulled together from diverse collections.   All originals are available for consultation from Rare Books and Special Collections reading room during regular opening hours. Map of the city of Montreal : prepared expressly for Lovell’s Montreal Directory for 1898-9 by Charles E Goad.

If you’d like to zoom in on an even bigger version you can download the full size PDF from our catalogue and export a 7.7MB JPG that measures 10004 × 7876 pixels.

At that size you can really zoom in and get some detail. Map of the city of Montreal 1898 – zoom into McGill University

The original map is available for consultation from our Rare Books and Special Collections map room during regular opening hours.