Recordings preserve the soundscapes of bygone eras but can also ensure a certain type of immortality. Nipper, the ubiquitous symbol of early commercial recording marketing, illustrates this point rather poignantly. Poised atop of what appears to be a wooden table, he is listening to sound or music through a gramophone. Upon further inspection, the table turns out to be a coffin and the only remaining evidence of Nipper’s master’s voice, is a recording. 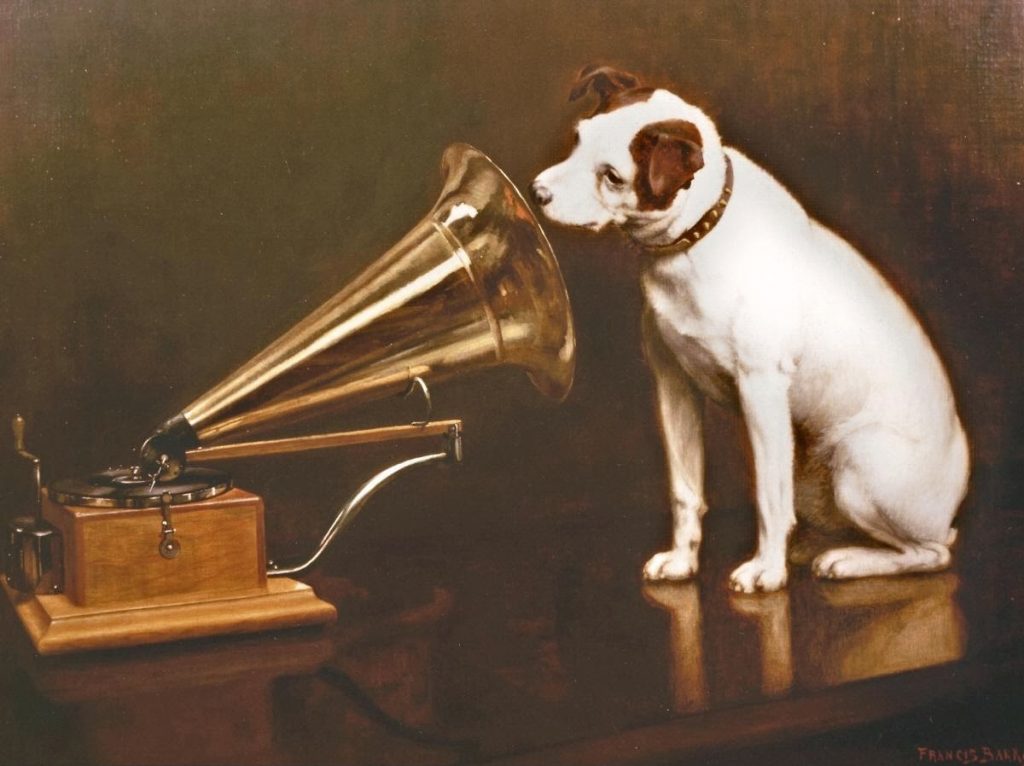 And then there was sound…

Thomas Edison was the first inventor to successfully record and play back sound on a tinfoil-covered cylinder in 1878. After experimenting with materials and playback technology, Edison released the earliest commercially-available recordings on cylinders as early as the 1890s. 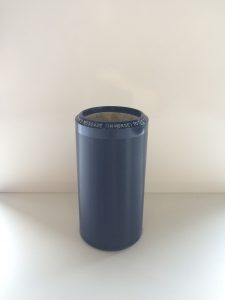 As Edison was working on the development of cylinders and phonographs, Emile Berliner was producing the first recordings on flat discs. The round flat disc would eventually dominate the market, and, as a result, Edison would cease production of his cylinders in 19291.

This 12 inch brown shellac record was released by Berliner Gram-o-phone Co. (Victor Talking Machine Company) circa 1907-1908. Note the use of brown shellac as opposed to the more common black colouring, showing early experiments with coloured discs. Also, this record is recorded on one side only, common to early 78 rpm recordings. 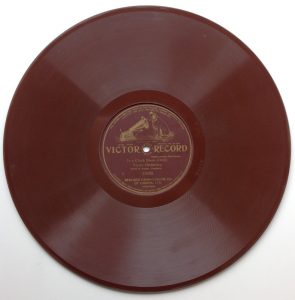 Most discs are recorded with the stylus cutting lateral grooves (side to side), though some, such as Edison Diamond Discs, Pathé discs, and Muzak 16-inch discs have vertical, or” hill and dale” cut grooves (up and down). Edison Diamond Discs were not only produced using this type of groove modulation, but were also made to play at 80 rpm (revolutions per minute). Although 78 rpm would eventually become the standard, recording speeds varied considerably in the early days of commercial recordings. Also worth noting is the considerable thickness of the Edison Diamond Discs (6 mm as opposed to 2 mm for the average record). 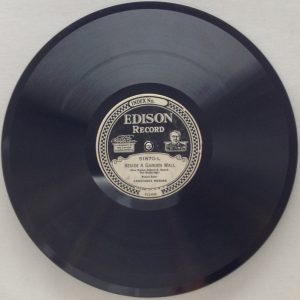 There is seemingly no end to the variety of materials which have been used to record sound onto discs. Flexible discs were made with light and pliable materials in order to allow for ease of distribution, and, occasionally, production. Sold at newsstands in the 1930s, “Hit of the Week” cardboard records are early examples of commercially-available “flexible discs”. Vinyl “flexi discs”, such as this Reader’s Digest disc, were produced on thin sheets of vinyl, and inserted in publications such as books or magazines. Among the more unusual materials used to produce flexible discs were discarded X-rays, which were used to produce bootleg recordings of “forbidden” music in the Soviet Union during the Cold War, fittingly dubbed “bone music.” 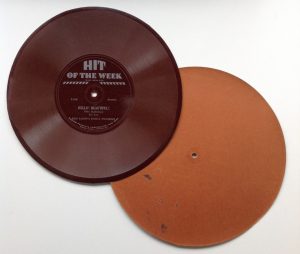 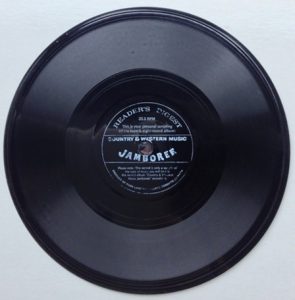 Since the early days of commercial recording, record companies have used coloured discs (and cylinders) in order to gain a competitive edge in the market. While some used these discs to colour-code certain genres of music within their catalogues, others produced coloured discs for their visual impact alone. Produced during the Great Depression, blue shellac Columbia 78 rpm records were deployed to entice people to purchase recordings during difficult economic times. The purple 10 inch record shown here was issued by the Hot Jazz Club of America Record Company. Not only is the colour rather striking but this record was made at a time when formats and materials were changing. Therefore, not uncommonly so for a record of its time, this disc is made of vinyl, but recorded at 78 rpm. 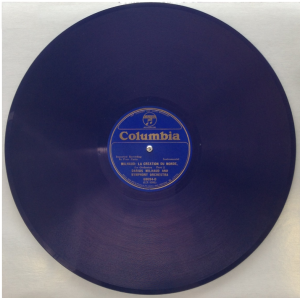 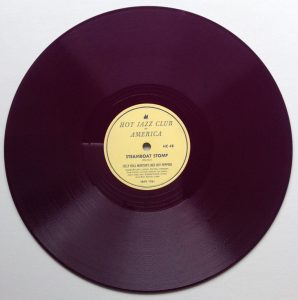 This 16 inch Muzak record stands out not only due to its colour, but also its size. The larger disc surface allowed for music to be played continuously for a longer period of time. The 16 inch format was adopted by radio broadcasters for this very reason. Muzak’s catalogue was colour-coded by genre, “provid[ing] a “red” service featuring dance music and a “purple” service of light concert music.”2 When RCA Victor launched the first 45 rpms discs they also used coloured vinyl to differentiate the various genres in their catalogue: “red for classical, midnight blue for light classics, green for county-western, yellow for children’s music, sky blue for international, and cerise (orange) for R&B.”3 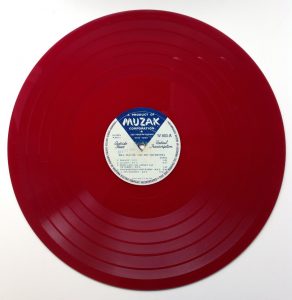 Picture discs feature images on the grooved part of the record, for aesthetic appeal. One short-lived and relatively early example of this are Vogue picture records which were produced from 1946 to 1947 by Sav-Way Industries. Noted for their artist-rendered illustrations, “Vogue picture records were sold individually, as well as in albums containing two records (…). [They] were of a very high quality, with little surface noise. The records were produced using a complicated process whereby a central core aluminum disc was sandwiched between the paper illustrations and vinyl.”4 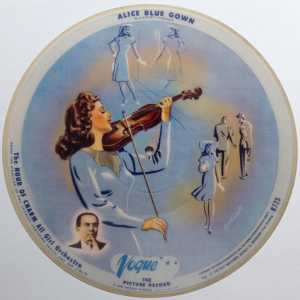 McCarthy, Tierney. Alice Blue Gown. The Hour of Charm All Girl Orchestra under the direction of Phil Spitalny featuring Evelyn and her Violin. Sav-Way Industries, R725, 1947.

From the private collection
of Cynthia Leive

In parallel to the development of commercial recordings, home and “one-off” recordings were made increasingly accessible due to the development of portable disc-cutting lathes which allowed users to produce instantaneous discs. Although these types of recordings were most commonly made on lacquer discs, a number of other materials were used including aluminum. Given their composition, lacquer discs have a high risk of deterioration. Discs were often made by coating a fiber, metal or glass substrate with nitrocellulose. Over time, the castor oil used in the composition of the nitrocellulose coating could leach out, potentially causing a white film of palmitic acid to form on the record, and/or causing the record to delaminate5. Also of interest is the starting point of the playback. This record is to be played from the inside outward and can be found in both commercial and private recordings, though it is not nearly as common as the habitual outside start.

This 10 inch transcription disc was produced as a “one-off” recording by the National Recording and Producing Co., located in the Willis Building (on the corner of St. Catherine and Drummond Streets), a former piano manufacturing plant in Montreal, Quebec. 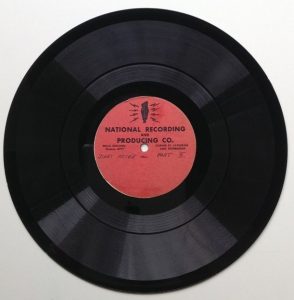 Phonomenal! Rare sides from the history of sound recording is located at the entrance of the Marvin Duchow Music Library, 527 Sherbrooke Street West, 3rd floor.