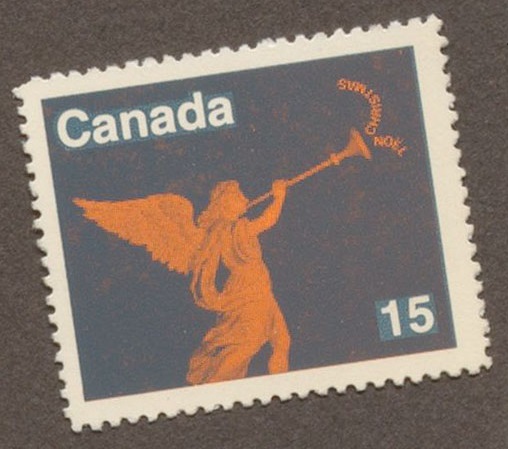 In March of this year, Robert Reid wrote a blog article for the Alcuin Society which began like the beginning of a suspense novel: “I was running a type house in Montreal at the time I was asked to design Christmas stamps.”

This would have been at the time of Expo 67. It is a nice story to recount, just as Peter F. McNally once did  for the Reidfest held in 2007. The story goes that Robert Reid created some designs as proposals for holiday stamps, which he had printed up on perforated sheets and mailed in to an art committee working for the Post Office. In the meantime, one of his employees had swiped a stamp out of the wastebasket and used it. Reid did not take the prize, and within two  weeks, the mounted police were knocking at his door on Sherbrooke Street, and up the street at McGill’s Rare Books Department, where Mrs. Elizabeth Lewis, the Head of the Department, had been steadfastly archiving all of  Robert Reid’s printed productions, whether large or small. She had to hand over her batch of stamps as well. The original story can be found here.

Fortunately, a hidden stash of the proof stamps is still within our grasp here at McGill University, in the William Colgate Collection, specialized in the History of Printing. Reid points out that the design below was based on a native French-Canadian wood sculpture dating back to the 18th century, a carving that he had come across at a  Museum in Quebec City.

Robert R. Reid is an award-winning typographer, graphic designer and letterpress printer- an acknowledged leader of the private press tradition in Canada. The William Colgate Collection showcases the fine printing he achieved during the “Montreal years”. His life reads like a good novel. 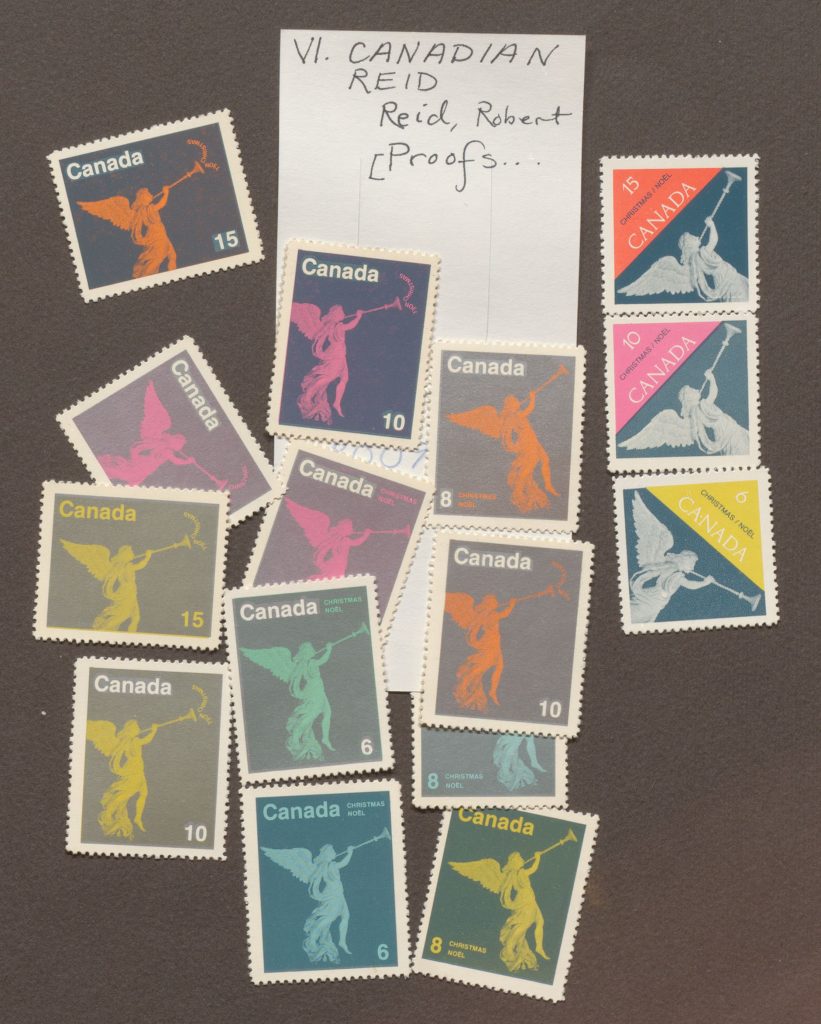 Born in 1927, Reid came to Montreal in 1963 from British Columbia. He spent more than ten years in Montreal from1963 to 1976. He first held the position as Designer and Production Manager for the McGill University Press, a responsibility he held for five or more years. During that time, he also accomplished really exquisite limited and special editions. The Lande Bibliography (1965) and the Notman Photo Album entitled: Portrait of a Period (1967) are two of the outstanding productions achieved under his direction in that category.

Reid later became Director for a new Publications Service at McGill University, serving the needs of multiple departments for various kinds of “job printing” – event posters, announcements, booklets, invitations, and various printed projects of an ephemeral nature, such as these colourful postage stamps. Reid moved on to New York by 1976, and stayed there for some twenty years. He is now back in British Columbia.

For a taste of the incredible and comprehensive record of Reid’s career, we invite you to consult his memoirs which are held in the William Colgate Collection entitled: Printing a Lifelong Addiction (Vancouver: 2002-2007) in 5 volumes and 13 parts, at last count. McGill has  No. 3 of just 16 copies of the volume on the “Montreal” years. It is a good place to start in order to appreciate the excellence of Robert Reid’s talents in the art of printing, and book-making. And of course, we have the originals.

We wish you very happy holidays.

And in connection with stamps, ..coming soon is a wonderful exhibition to be held at the McLennan Library entitled:  “Every Stamp a Story: History, Culture and Art through the Lens of Philately”, curated by David M. Lank, and sponsored by the Friends of the Library. On view as of January 13th, 2017.

Now it just so happens that David M. Lank and Robert R. Reid published a very handsome book together on Thomas Bewick. To be continued… .