This coming Tuesday, December 2nd, Dr. Craig Stephenson will give a free public lecture on his book Anteros: A Forgotten Myth.

“Anteros: A Forgotten Myth explores how the myth of Anteros disappears and reappears throughout the centuries, from classical Athens to the present day, and looks at how the myth challenges the work of Freud, Lacan, and Jung, among others. It examines the successive cultural experiences that formed and inform the myth and also how the myth sheds light on individual human experience and the psychoanalytic process.”

—from the publisher (Routledge)

About the speaker: Craig E. Stephenson, Ph.D., is a graduate of the C.G. Jung Institute Zürich, the Institute for Psychodrama (Zumikon, Switzerland), and the Centre for Psychoanalytic Studies, University of Essex. He is the author of Possession: Jung’s Comparative Anatomy of the Psyche (Routledge, 2009), editor of a collection of essays titled Jung and Moreno: Essays on the Theatre of Human Nature (Routledge, 2013), and the translator of Luigi Aurigemma’s book of essays, Jungian Perspectives (University of Scranton Press, 2007). He has lectured at the Bodmer Foundation, Geneva, for the Philemon Foundation and at the Warburg Institute, University of London. 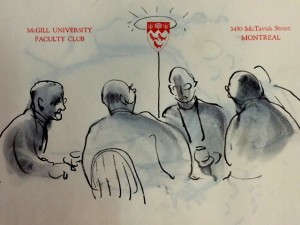 Read more about our collaboration with the Montreal Museum of Fine Arts and about McGill Library & Archives events commemorating the centenary of the First World War here.

Recently, while cataloguing some volumes from the J. Patrick Lee Voltaire Collection acquired by McGill in 2013, our colleague Marc Richard discovered a very intriguing book:

“This particular edition of L’évangile de la raison was published in Year 10 of the French revolutionary calendar, a date which corresponds to either 1801 or 1802. It’s a compilation of previously published works, assembled and edited by Voltaire, and includes many works written by him. Several editions of this compilation exist; indeed, the J. Patrick Lee Collection also holds a 1765 edition of the same title.

The Voltaire volumes of the Bibliothèque nationale’s Catalogue général des livres imprimés, published in 1978, do not include this edition at all, and prior to our cataloguing of this edition there was apparently no record for it in the OCLC WorldCat online database, which covers the major research libraries in North America and much of Western Europe.”

McGill’s volume confirms that this edition survives. The book is available for consultation here at RBSC, and more detailed information about it can be found in the catalogue record which Marc has prepared for it. Marc’s description makes it possible for researchers around the world to discover this copy of the volume, and our digitization team has created a full high-quality digital reproduction. The record for the physical copy can be viewed here; the full digital copy can be linked to from the e-copy record here