David and Bess, flying from their home at the palace of Ethiopian Emperor Haile Selassie in Addis Ababa, moved to Montreal at only 4 months old. Like many in 1967, they came for the excitement that Montreal’s Expo ’67 promised. But unlike many Expo goers, David and Bess were lion cubs. 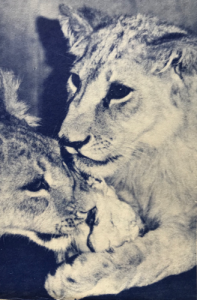 The royal cubs were flown in as part of the Ethiopian Pavilion. From their arrival, the Zoological Society of Montreal’s general manager and founding father, Gerald T. Iles, was heavily involved in their care and welfare. In fact, he visited the two cubs almost every day in the summer of 1967, protecting them from malevolent maintenance workers who he said tormented and threw cigarette butts at the felines.

The wild animals seem to have had a real affection for Mr. Iles. As he wrote in the Society’s journal The Lynx in 1967 “I tried [giving them] vanilla ice cream. This was much appreciated. After finishing the treat David would often give me a lick up my face which was hard to take. In time Bess would also show her appreciation in the same way.”

He quickly decided that live animals should never have been brought to Expo ’67, but all the same he tried to keep them happy and healthy. The latter pursuit was no easy task – from their arrival, the lions were plagued with infections, abscesses, and illness. Mr. Iles spent a considerable amount of time with the lions on his lap, driving them back and forth between the Zoological Society’s veterinarian and the pavilion. 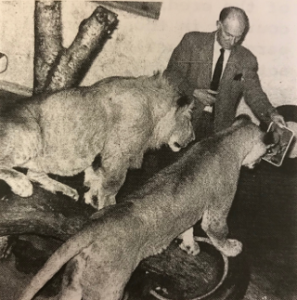 Gerald Iles shows David and Bess a Mirror. Photo by Mary Burns, found in the Society’s journal The Lynx (Vol 3, No. 2 December 1974).

As the summer ended, and the Zoological Society had written several angry letters about the treatment of David and Bess to all parties involved in their immigration to Canada, the Society was ready to put up a fight to adopt the lions. But no fight was necessary, it took only one letter to convince the City of Montreal to relinquish their ownership of the cubs, a further tribute to the city’s lack of interest in the lions’ well-being. As winter set in, a generous member of the Society offered to house the lions at McGill’s Macdonald campus.

What happened to Bess and David after that is unclear but what is clear is the kind and charitable nature of the Zoological Society of Montreal. Throughout its 52 year existence, the goal to protect the wildlife of Canada, or any foreign wildlife visitors, was the Society’s driving mission. Founded in 1964, the Zoological Society of Montreal brought attention to conservation issues through field trips, guest speakers, and large projects, including their own endangered species pavilion at the post-Expo exhibit Man and His World in 1975. The Society also contributed to other conservation initiatives through benevolent donations, animal adoptions, and support.

Join us in a social media colouring fest! McGill Library, along with hundreds of our friends at libraries, museums, and cultural institutions around the world, has turned our collections into colouring books. This year, we’ve included material from the Osler Library of the History of Medicine, the Marvin Duchow Music Library, and Rare Books and Special Collections.

Participate by downloading our colouring book and sharing your finished work to Twitter, Facebook, or Instagram, and tagging us (#McGillRarebooks or #OslerLibrary) as well as #ColorOurCollections. 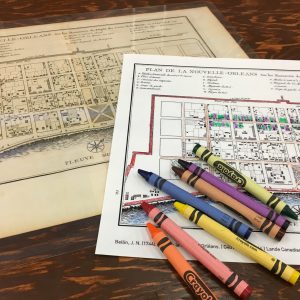 This fun initiative was launched by The New York Academy of Medicine Library in 2016. We are proud to participate for a third year in a row. Check out our past offerings for more great images from 2017 and 2016.