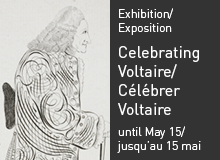 To supplement the exhibit on Voltaire, we have conducted further research on the exhibit’s centre piece. It is a handsome standing portrait of Voltaire represented in the later years of his life, with calligraphic flourishes on his jacket, hat under one arm, and a cane in the other, entitled “PRIERE DE VOLTAIRE”. Printed in Paris in 1805, this engraved portrait turns out to be quite rare.

Exhibitions are a matter of team work. First of all, our sincere thanks to Michael David Miller, Liaison Librarian for French Language and Literature from McGill’s Humanities and Social Sciences Library, who helped to prepare and mount the “Celebrating Voltaire” exhibition. As for the image, thanks to Greg Houston of Digitization Initiatives, for digitizing several Voltaire-related imprints; and to Lauren Goldman, Communications Officer from the McGill Library, who integrated this image into various announcements relative to our series “Celebrating Voltaire”. Selection for the exhibition was accomplished in collaboration with the Head of Rare Books and Special Collections, Dr. Richard Virr, who identified and designated this print as the “brand” image for the McGill Voltaire Collection. This flurry of activity of course was inspired by the recent extraordinary acquisition in 2013 of the J. Patrick Lee Voltaire Collection. In the case of this print, we are making connections from the established collections to the topic of Voltaire. 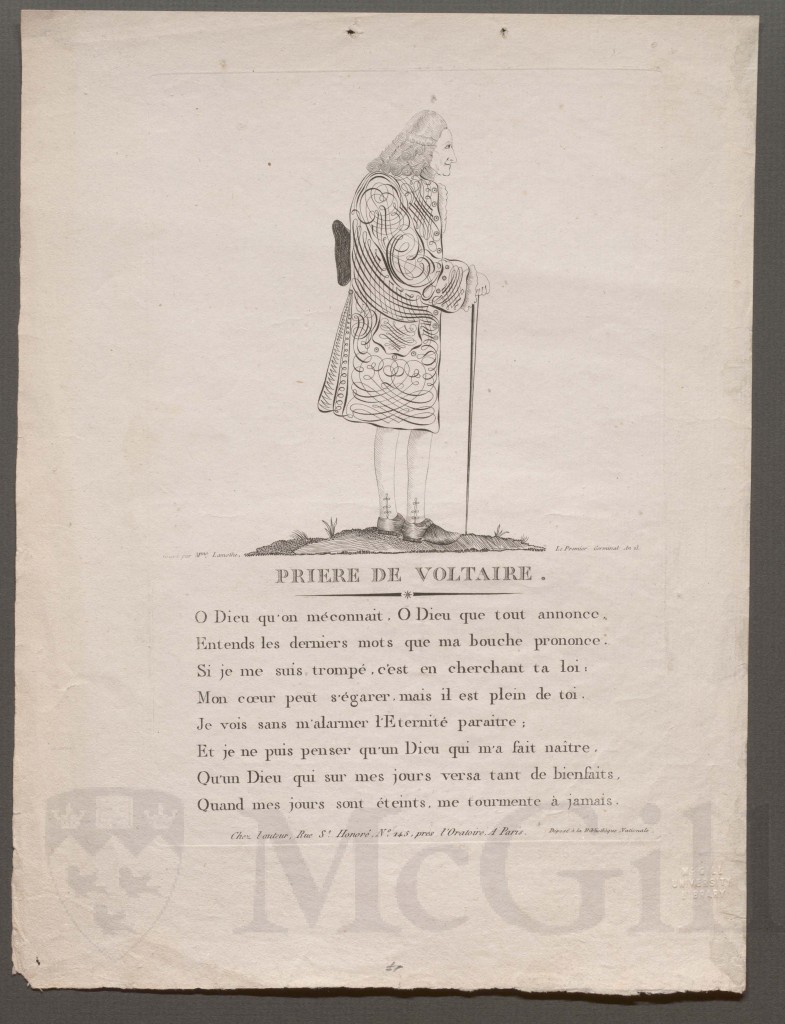 It is uncommon to see an engraving signed by a woman in the early 19th century. Unfortunately we do not know more about Madame Lamothe for the time being.

Secondly, McGill’s use of the print as advertisement has not always made obvious the text printed beneath the portrait: a “Prayer ”engraved in roman lettering, consisting of 8 lines of poetry, in 4 rhyming couplets. In fact, the text can be traced to an earlier print (de Vinck 4102), probably from the 18th century.

The plate is signed on the left side of the portrait as: “Gravé par Madame Lamothe”; and dated on the right side as: “Le premier Germinal An 13” (ie. March 22, 1805). At the bottom centre of the plate, is inscribed the place of printing and publication: “Chez l’Auteur, rue St. Honoré, N°145, pres [sic] l’Oratoir, A Paris. – Déposé à la Bibliothèque Nationale. This print of Voltaire is indeed held at the Bibliothèque nationale de France, but for the moment no other locations can be found, including other institutions in North America.

McGill has the good fortune to possess a second print by Madame Lamothe of the rival “philosophe” Jean-Jacques Rousseau. It is dated “Janvier 1806”, and is entitled: “PENSÉE DE J.J. ROUSSEAU”. The outline for the artistry and the layout for the lettering is almost identical as the former print of Voltaire. In the second example, Rousseau is shown gathering flowers, walking in the opposite direction, hat under his arm, a cane in his hand, and done up with a similar calligraphic treatment of jacket. The image is again accompanied b 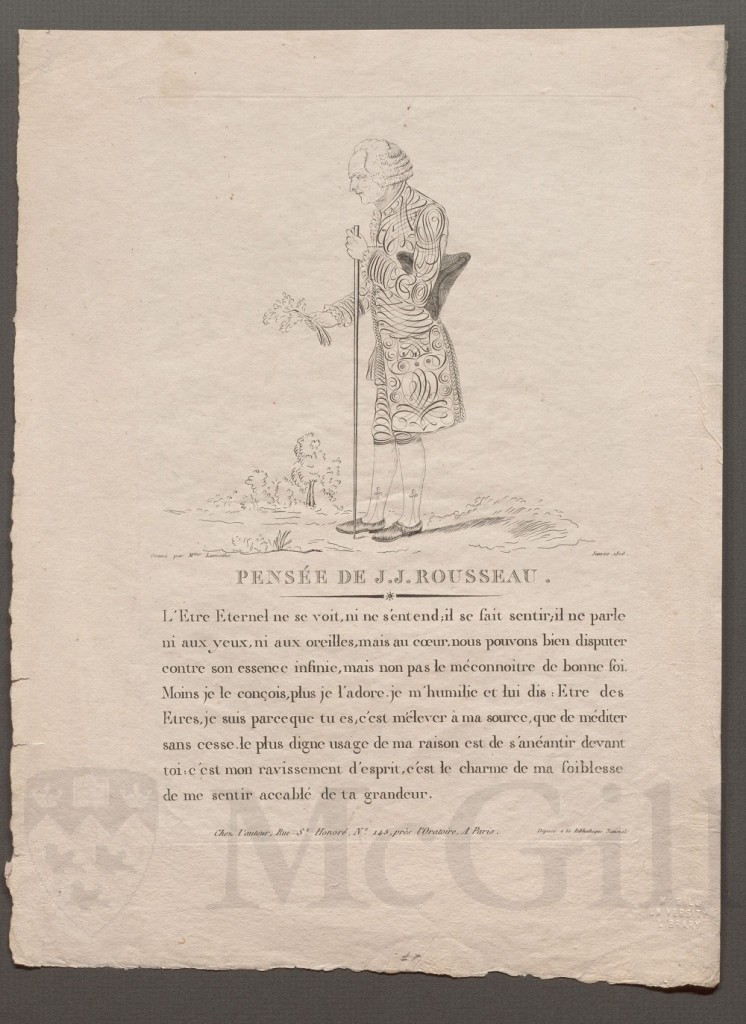 y 8 lines of text, this time in prose, and engraved in the same style of roman lettering. Both prints are of the same plate size: 27 x 18 cm and the same sheet size 33 x 25 cm.

A second state exists in the print collections of the Bibliothèque nationale de France (de Vinck 6333), with the following imprint information: “A Paris chez l’auteur, Rue St. Magloire, no. 2” – which is engraved slightly higher on the plate. We think that the original plate was altered to accommodate this new address and reprinted.

With regards to the source of inspiration for these portraits, we have located two distinct prototypes in the collections at the Château de Versailles, which clearly served as the basis for Madame Lamothe’s particular compositions some 25 years later: one of Voltaire dating from 1778; and the other of Rousseau, dated 1779, signed Moreau le jeune after a drawing by Mayer (ie. Georg Friedrich Meyer).

It is not odd to pair the images of the two philosophers – both died in the same year, 1778, and both were instrumental somehow in the French Enlightenment. Their images circulated widely following their deaths. These works suggest the continued importance of the two philosophers at the time of the creation of these two engravings (1805 and 1806).

As for their entry into McGill collections, the prints were accessioned as a pair, roughly between 1946 and 1965, into the European folio print collection, inventoried as numbers 44a/ 44b.

There is much more to gather about the artist, the scarcity of the prints, and their provenance. We invite you to have a look at the “Voltaire” engraving while it is on view in the exhibition, and look forward to any feedback concerning the possible locations of these prints elsewhere in the world.