Next Wednesday, 14 January, a book launch and manuscript viewing will be held in the Osler Library of the History of Medicine at 5pm.

McGill-Queen’s University Press has just published The Herbal of al-Ghafiqi. A Facsimile Edition of MS 7508 in the Osler Library of the History of Medicine, McGill University, with Critical Essays, edited by F. Jamil Ragep (Director of McGill’s Institute for Islamic Studies) and Faith Wallis (McGill, History and Classical Studies/Social Studies of Medicine).

The manuscript in question is exceptional: a 13th-century illustrated copy of the treatise on materia medica by a physician and scholar from al-Andalus (Muslim Iberia), Abū Jaʿfar al-Ghāfiqī (d. ca. 1165 CE).The Osler manuscript has 468 primary entries for mainly herbal, but also mineral and animal, drugs. It also includes around 2200 secondary entries that provide synonyms in a staggering assortment of languages, including Greek, Sanskrit, Syriac, Persian, Berber, Old Spanish, Latin, Coptic, and Armenian, reflecting the international character of medicine and pharmacy at the time. Complementing the facsimile edition are six essays by eminent scholars who deal with the physical features and history of the manuscript, the philological complexity of the text, Ghāfiqī’s sources, the Andalusian as well as the larger global context of the herbal, and the illustrations accompanying the text.

The production and dissemination of the Ghafiqi facsimile would not have been possible without the support and generosity of McGill’s Class of Medicine of 1961. Thank you.

The holiday season is upon us and the ISL will be closed as of 3pm today only to re-open its doors on the 5th of January 2015 at 9am. This has been another successful year for the ISL in terms of attendance (over 61,700 unique visitors), collection development (close to 3,000 items added including approximately 150 reference materials) and a number of additional activities (exhibitions, talks, information sessions, etc.). It’s been a busy year! Thank you for your support and enthusiasm in the ISL’s activities! 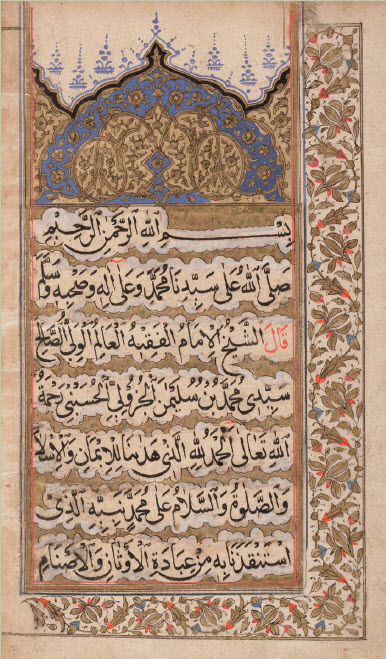 On a different note, a new publication has been released entitled: “Meetings with Books: Special Collections in the 21st Century. With a Tribute to Raymond Klibansky.  Illustrated Survey of Special Collections at McGill University Library and Archives.” This collaborative effort led by Drs. Jillian Tomm and Richard Virr of McGill’s RBSC provides an enlightening survey of the magnificent collections housed in RBSC. Included in those collections are many Islamic materials inclusive of Manuscripts (the image comes from the Dalāʼil al-khayrāt, RBD A6), Calligraphy, Lithographs and Rare Books. One is able to order a physical copy through contacting Dr. Tomm but there’s also an online open access version here.

Happy Holidays from the ISL’s staff and we look forward to seeing you in 2015!

Hi friends! A new exhibition is now on display at the Islamic Studies Library. The exhibition celebrates Ibrahim Müteferrika and his early printed books. 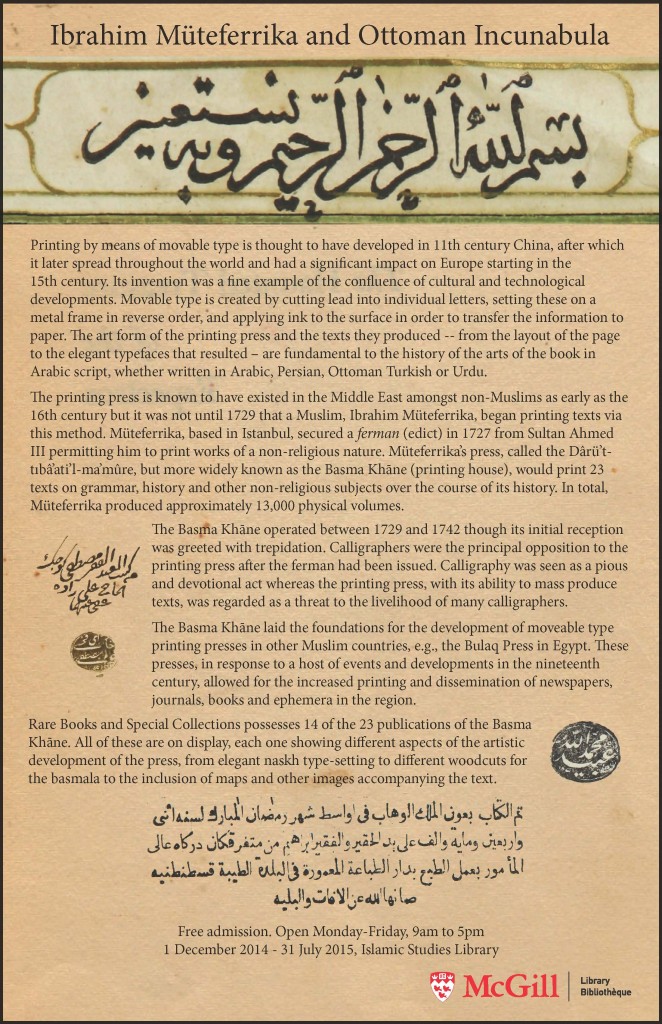 We currently have a 30 day trial of Cambridge Archives Edition Online. The trial runs from 1-31 October 2014. The CAE offers a plethora of primary sources in translation. From their website: “The collections of key documents are always made on specific and well-defined areas of research and each collection has the added value of arrangement into specific topics and document by document identification/description. The series of political reports focus on completeness and organisation of material previously unknown or scattered. Each collection is researched and edited by a professional researcher and sometimes also in cooperation with an academic specialist and presented in facsimile.”

Please let us know what you think!

Hi friends!
We currently have a 30-day trial with this new online resource. From their website:

Oxford Dictionaries | Arabic is a new groundbreaking resource for those with an interest in the Arabic language. Structured by Oxford’s renowned language research and compiled by an international team of expert advisors, the dictionary is based on language as it’s used today. Oxford Dictionaries | Arabic contains the latest vocabulary in technology, business, media, and the arts in both languages to ensure you have the most up-to-date words at your fingertips.

Please let us know what you think.

Eastview has just provided the community with access to the database.

Some of the contents include:

“Over one million people identify themselves as Muslim in the Russian Federation, making Islam the second largest religion in Russia behind Russian Orthodoxy. With archives dating back to 2004, this unique collection delivers access to this influential community’s most important publications on:

Take a look at the database yourself. Click here to login. At the prompts, enter:

Let us know your experience!

Another new addition to McGill’s electronic resources is the South Asian newspapers database. Created by the Center for Research Libraries and Readex, it ” features titles published in India, Pakistan, and Sri Lanka. Languages include English, Bengali, Gujarati, and others. Titles include such key publications as: Amrita Bazar Patrika (Calcutta), Bankura Darpana (Bankura, India), Madras Mail (Madras), Tribune (Lahore, Pakistan) and the Ceylon Observer (Sri Lanka). A complete list of titles is available on Readex’s site.”

The ISL has recently acquired a new online resource, Mideastwire.com. Established in 2005 and based in Beirut, the database covers the 22 Arab countries’ newspapers (around 50 publications) by providing translations of important and noteworthy articles. The archives only go back to 2005 but it is a highly valuable addition for students and researchers of current and contemporary events.

For further information and comparison with some other news resources on the Middle East have a read through Brian Whitaker’s 2005 article in The Guardian.

In honour of this week’s New Approaches to World Islamic and Middle East Studies workshop hosted by the Institute of Islamic Studies, the ISL has a special one week exhibition. Come one, come all!

2 new Arabic resources that may be of interest:

And the other is an app for Google Chrome which provides the researcher with popular transliterations of a name. Arabic transliterator.