This term, the Islamic Studies Library is trialing two databases relevant to students and researchers in the field of Islamic and Middle East studies:

Make sure you try them out, and share your feedback with us!

ASC gives access to partisan serials from the Wahdat Library which is “the most comprehensive private collection of rare newspapers and journals from Afghanistan.” The Afghan Serials Collection includes 46 newspapers and journals published in Persian, Pushto, Arabic, Urdu, and English (i.e. more than 2,500 issues). As outlined on the database homepage: “the Afghan Serials Collection covers the use of the press by many groups that sought to shape Afghanistan’s social and intellectual landscape including the Communist People’s Democratic Party (PDPA); exiled loyalists to the deposed Afghan monarchy; independent humanitarians and intellectuals seeking to better their country; anti-Soviet mujaheddin groups from a range of political movements; the Taliban; and minority political parties that have emerged following the post-2001 transition towards democracy.”

Features offered by this database are numerous:

CAE gives access to thousands of primary source documents from the British National Archives in facsimile, including maps, on the Middle East, Russia and the Balkans, the Caucasus, Southeast Asia, and China and the Far East. The Near and Middle East Collection alone includes 118 titles documenting the history of the region between 1850 and 1980.

Documents can be searched, browsed, or discovered by topic (15 topics are used to classify the materials). They can be read online using the “Reading Mode” (full page display with left-hand side navigation bar) or dowloaded in PDF. WHat makes CAE particularly interesting is the fact that documents have been OCR’ed (Optical Character Recognition) allowing for searching occurrences within a publication.

CAE will be of particular interest to historians.

A Corpus of Arabic Legal Documents (CALD) is a database of edited (transcribed) primary source materials from the pre-modern period (8th-15th century). According to the creators, CALD “is the first-ever collection of scattered editions of legal documents often [provided] with improved readings compared to earlier print versions”.

CALD is supported by the European Research Council (ERC), and results from the concerted efforts of individuals from several institutions among which the Institut de recherche et d’histoire des textes (IRHT).

CALD includes a great variety of documents, such as sales contracts, lease contracts, acknowledgements, charity aims, court attestations, etc., available in PDF with the original Arabic text in modern spelling as well as complete bibliographical data. In addition, images of original materials and/or URL links are provided when possible. 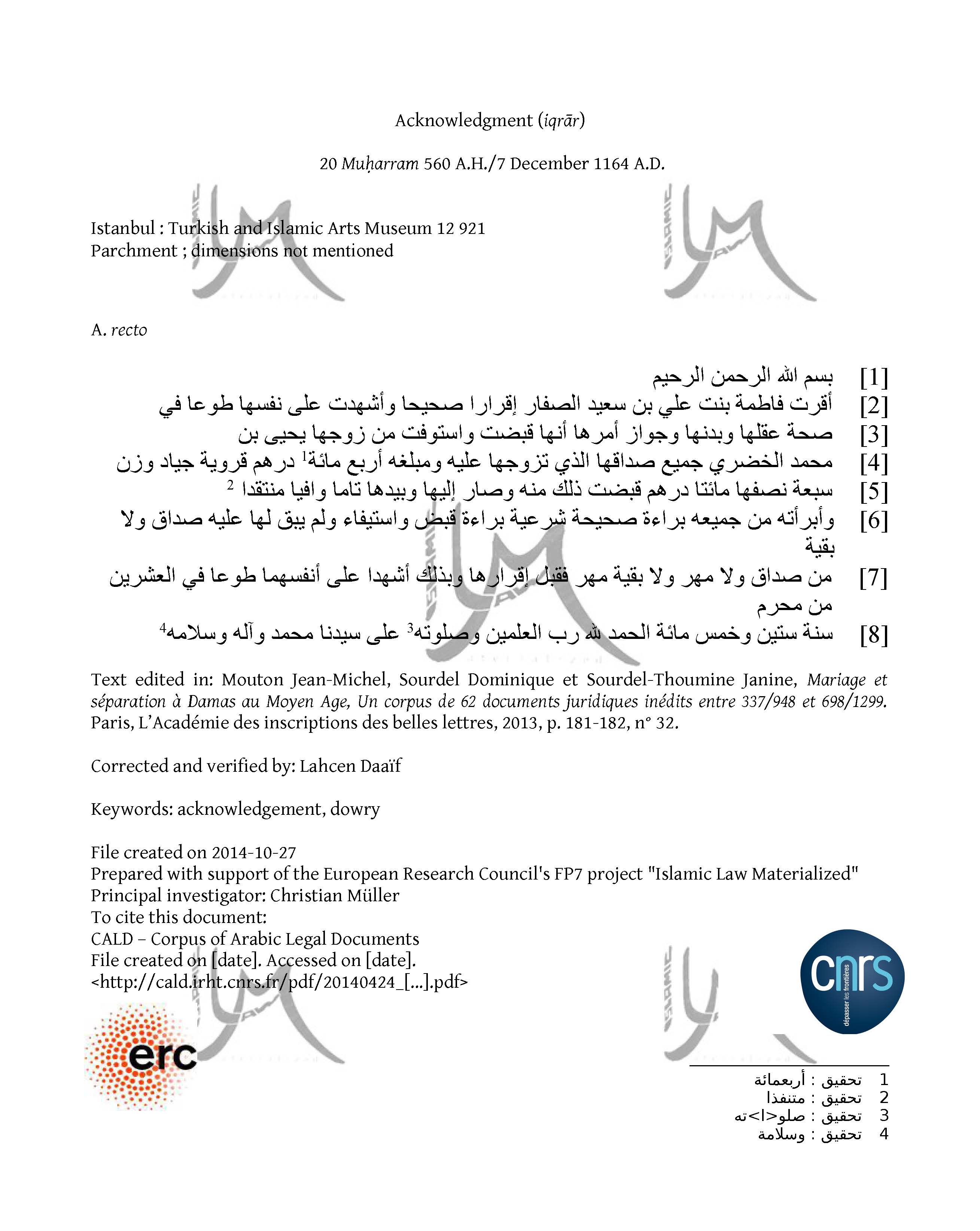 Example of an edited document

Visitors can browse documents either by location (city) or library inventory number, or search the database for legal terms in Arabic.For greater access to CALD’s functionalities, visitors can create an account: logging in allows to cross-search Arabic terms, document types, dates and keywords.
The interface is available in French, English and Arabic.

From November 7th to December 7th 2017, the McGill Library is trialing e-Marefa which is an integrated database of full text journals, research papers, theses and dissertations, conference papers, etc. covering a wide variety of topics in Physical sciences, Life sciences, Engineering, and Humanities and Social Sciences. The website is in Arabic and English.

In e-Marefa, each specialty has its own database, the most relevant for Islamic and Middle East studies students are highlighted below:

Resources should be accessible to all McGill users with no login required. In case you were asked to login, you may use the following:

Try it out and let us know what you think!

From October 2nd to 31st 2017, the McGill Library is trialing Arabic Literature of Africa Online (ALAO).

“ALAO is a bio-bibliography on the Arabic manuscript tradition in the African continent, which continued well into the 20th century CE. It offers authoritative information about African authors, the texts they wrote in Arabic, the manuscripts in which these texts are found, and the locations of these manuscripts, together with bibliographical references to the literature.”

Check it out and let us know what you think!

The History of Science and Medicine collection “includes manuscripts, incunabula, early printed books and monographs from the 10th to 20th centuries. The collection showcases the contribution of early Arab and Persian scientists, doctors and thinkers; their translation, reception and influence in Europe and their lasting influence on the development of Western scientific and medical knowledge. It includes:

The Arcadian Library Online displays colour images in high resolution. Materials can be saved, downloaded, printed, shared, and cited directly from the viewer.

The interface is bilingual English/Arabic, and the database searchable in both languages.

The McGill Library is trialing the EBSCO ebook Arabic Collection until June 3, 2017.

Check it out, and let us know what you think!

Arab World Research Source is an EBSCO dabatase of academic journals, magazines, trade publications, conference papers, and industry profiles that are published in or pertain specifically to the Arab World. Disciplines covered range from Engineering, Science and Technology to Literature and Writing, passing by Law, and Social Sciences and Humanities.

Series 1 contains over five million pages from titles dating from the late 13th century through the 1893 World Parliament of Religions, with a majority of 19th century titles. Because religion was such an integral part of the social, political and economic fabric of life during this time period, historians researching a wide range of areas, not just religion, will find invaluable material relevant to their work.

Series 2 contains over five million pages from over 14,880 monographs dating from 1894 to 1922, and  provides a broad view of the changing landscape of religion in America at the end of a century of dramatic cultural and political change.

The ATLA Historical Monographs Collection is also accessible in eleven thematic subsets such as:

This resource will be of interest for scholars working on understanding religious thought and practice, particularly in the 19th and early 20th centuries. Preserved and curated by the American Theological Library Association (ATLA), the Historical Monographs Collection includes over 29,000 titles in more than 50 languages.

From February 8th to March 10th, 2017, the McGill Library is trialing Arabic Literature of Africa Online, a bio-bibliography on the Arabic manuscript tradition in the African continent.

ALAO offers authoritative information about African authors, the texts they wrote in Arabic, the manuscripts in which these texts are found, and the locations of these manuscripts, together with bibliographical references to the literature.

Please, check it out and share you feedback with us!

E-Marefah provides acces to full text and comprehensive metadata of over 700,000 journals, research papers, theses and dissertations, conference papers, statistical reports, and e-books in all disciplines, including most recently published titles.

All databases can be searched simultaneously or separately, either in Arabic or in English, through a single search box. Search results display in a table including extensive metadata and a link to the PDF document when full-text is available: