“We firmly believe that every book needs more maps, and would be delighted if these maps could be useful toward that end”

The blog is dedicated to presenting quality Ottoman/Turkish/Middle Eastern/Balkan maps with a maximum pixel-to-word ratio. A range of original, visually appealing and intellectually engaging maps harvested from archives and libraries around the world.

The afternoon Map will appeal to history buffs, travelers and map enthusiasts. Each map is provided with some background and analysis when available. Historians and other researchers will find these maps useful for their work.

“The Afternoon Map is a member of MENAlab, a constellation of independent internet destinations focused on the history, society, and culture of the Middle East and North Africa”

The blog uses content generated by scholars and researchers from a variety of disciplines. The afternoon Map is open access and free from advertisement.

Under Afternoon Map’s Comprehensive Map List, one can find the following:

Blog posts in this section varies in topics (geographical, touristic, ethnic, etc.), in dates (as old as 1874) and in length (from one map to 14 maps)

Topics in this section, not necessary related to maps, but it is worthwhile exploring!

A list of published articles authored and/or co-authored by Nick Danforth on various media platforms and academic journals. There is a couple of articles that are marked unpublished.

Provide a link to Ottoman History Podcast, a podcast about the Ottoman Empire, the modern Middle East, and the Islamic world.

In this section, blog posts are randomly displayed. This may appeal to those who like the surprise factor.

Persuasive Maps is a collection of more than 800 maps collected by P.J. Mode housed at Cornell University library. This collection holds maps dating from the 1800s to the present day and covers various geographical areas of the world. 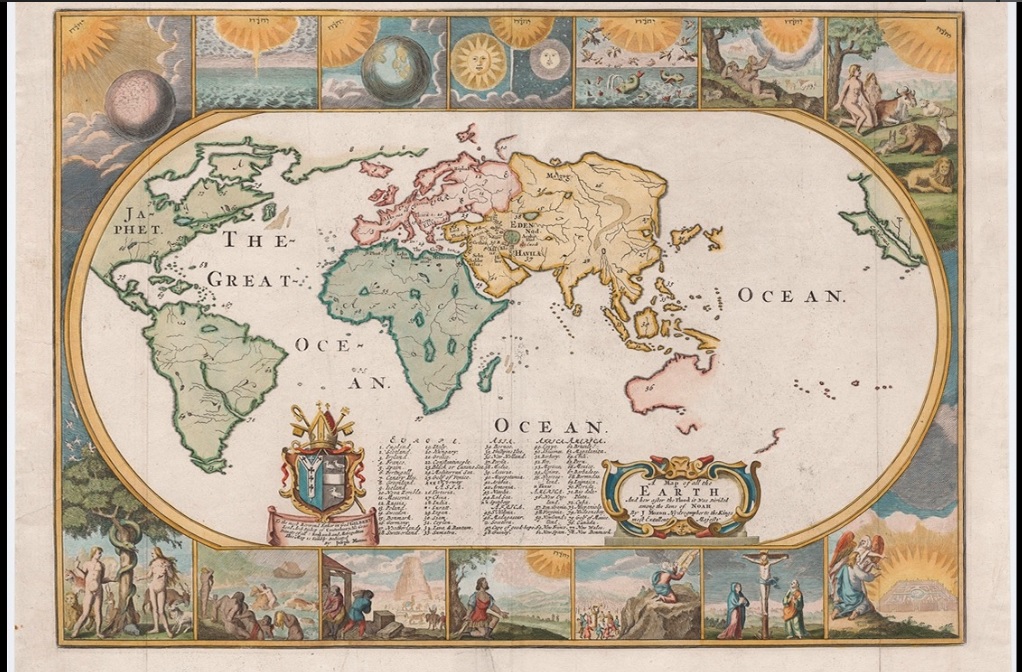 ….While this map provides a reasonably accurate view of the world as known in 1681, it was intended primarily for religious education, bound (folded) into copies of English-language bibles and other religious works of the 17th and early 18th centuries (Shirley 1983, #457). The seven days of creation are illustrated in the panels at the top of the map. Below are the expulsion from Paradise, the Flood, the Tower of Babel, God speaking to Moses, the Ten Commandments, the Crucifixion and the Ascension. The voice of God is represented by Hebrew characters…The map is centered on Eden.

Persuasive Cartography seeks to communicate more than geographical information and intends to influence opinion or to send a particular message. Since maps represent a subject viewpoint, cartographers needed to decide what information to include or exclude.

Maps sit somewhere on the spectrum between science and art and subjectivity and objectivity. The maps of this collated collection are chosen because they communicate messages beyond geographical information. For instance, they illustrate a whole range of human concerns from religious, political, military, commercial, moral and social.

On May 3, 2016 P.J. Mode in a presentation to The Grolier Club of New York and New York Society, gave an interesting talk entitled “Deconstructing Persuasive Cartography”, in which he elaborated on the concept and idea of Persuasive maps and discussed different examples of maps from his collection. Link to the video 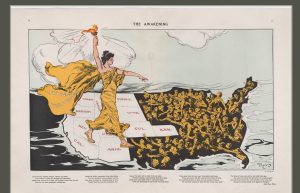 …Lady Liberty, wearing a cape labeled “Votes for Women,” stands astride the states (colored white) that had adopted suffrage. She holds aloft her torch, bringing “enlightenment” to women in those states still in the dark. The faces of these women are turned up to the light, and some reach out in hope. (Many have fashionably short hair and hats, reflecting the middle and upper class core of the suffrage movement. Dando 2010, 224)….

Along with developments in technology and communications, the methodology of persuasive cartography has also developed. “The collection reflects a variety of persuasive tools: allegorical, satirical and pictorial mapping; selective inclusion or exclusion; unusual use of projections, color, graphics and text; and intentional deception.”

Qatar Digital Library (QDL) is a growing repository for over 500,000 historical and cultural records of the Gulf and wider region. The Archives is available online and includes wide range of materials: maps, manuscripts, sound recordings, photographs and much more, complete with contextualized explanatory notes and links, in both English and Arabic. 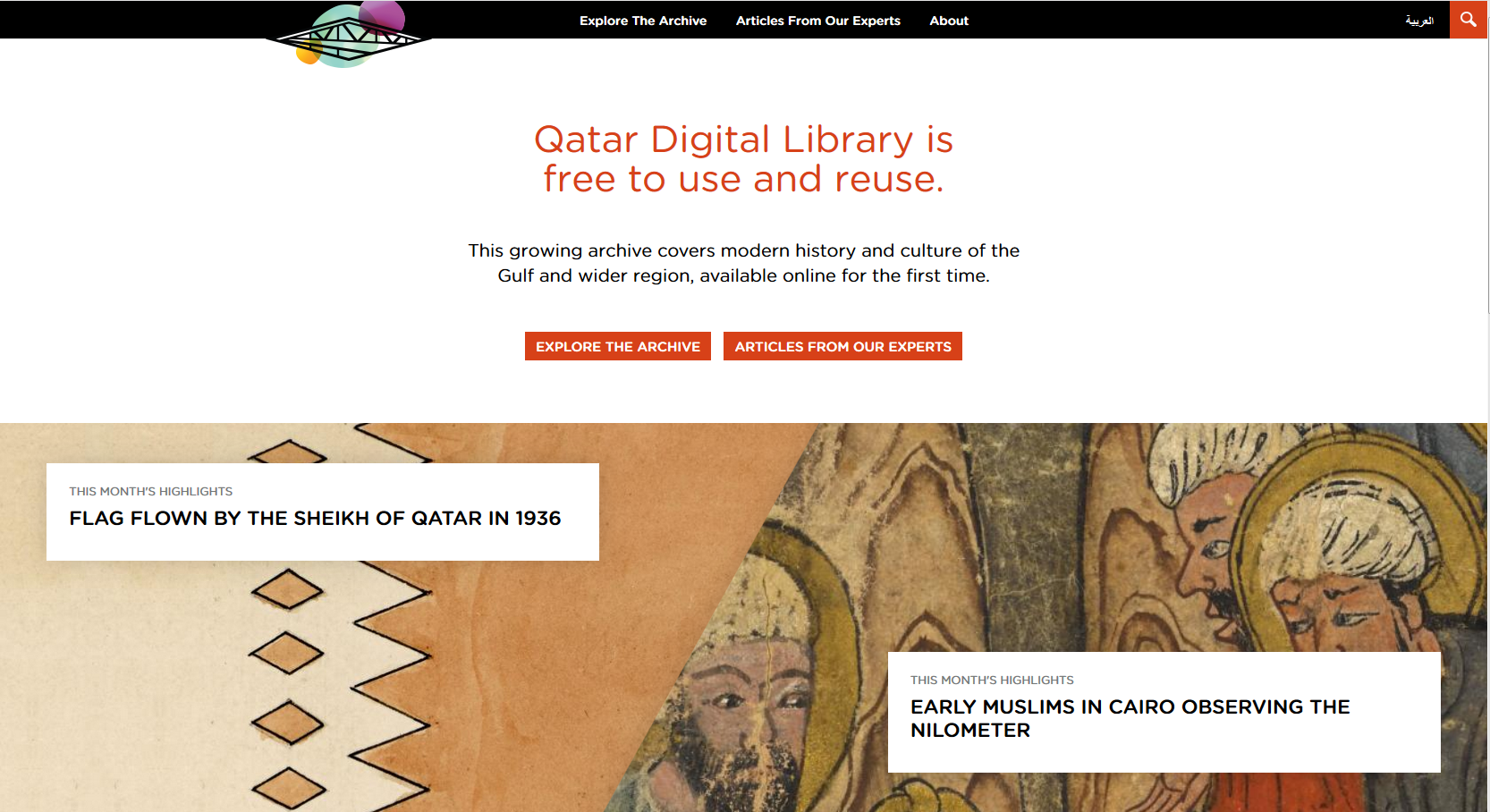 The QDL was made possible through a Memorandum of Understanding on Partnerships between Qatar Foundation, Qatar National Library and The British National Library. The aim of this partnership is to make a world-class resource freely available for everyone, for general audience and academic researchers. 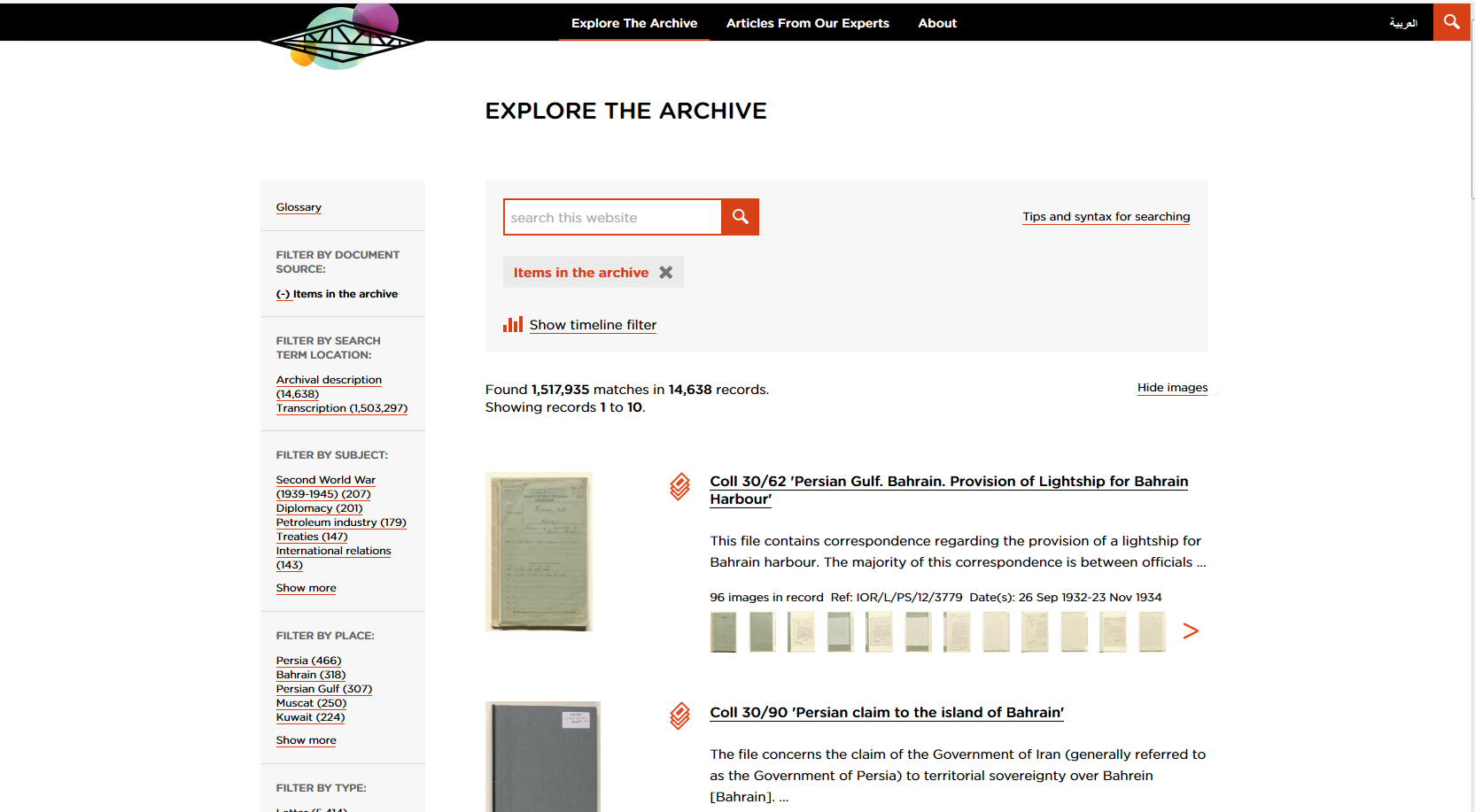 The site was launched on 27 October 2014. According to Cogapp, an industry-leaders in producing software for online archives and museums who designed and developed the software; the interface is user friendly and it is accessible across multiple devices, including mobiles, tablets and desktops. Everything is shareable on social media. All items can be zoomed to explore incredible details. It also allows the user to conduct a highly filterable search; 150 facet options are available to refine the search. The site and content meet archival standards and accessibility criteria. 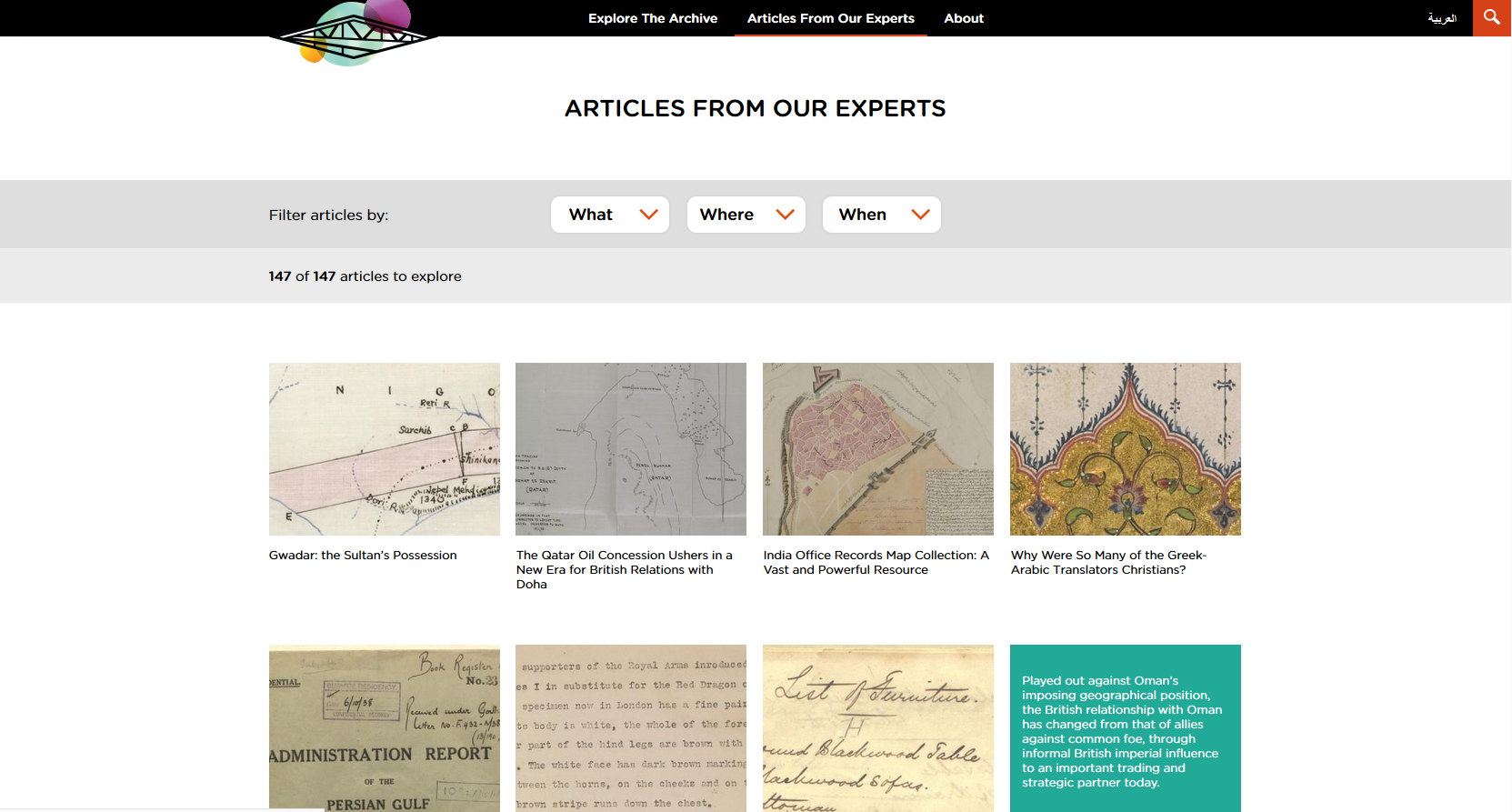 The repository also include 147 articles to explore, all grouped under Articles From Our Experts which can be filtered by topic, geographical location and time period. Switching from Arabic to English is possible through the language tab located on top of the page.