I first experienced virtual reality (VR) this year at McGill in the HSSL Library’s Research Commons Room B. Equipped with an HTC Vive and a high powered computer station, I was able to utilize different apps and experience technology, and the world, in a new way. I experimented with Google Maps and, when I looked around, slowly scanning the horiz 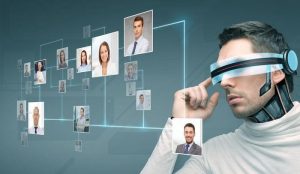 on, I could see the expanse of the entire galaxy all around me. I looked down and saw myself standing in an endless, open black area—which I quickly realized to be space. With a slow turn of the head, I could see the stars of the Milky Way beaming within a clear night sky. I was blown away. Wearing the HTC Vive for the first time is an experience I will never forget. With firm confidence, I can attest to the quality of the imagery. It is so detailed and life-like that it will take you on a mental voyage. For a minute or two while wearing the handset, I was convinced that I was brought to outer space. Such is the power of VR. It can transport you to other worlds in a split second. Once the initial awe had died down, I tried to explore VR as much as possible.

Virtual reality (VR) is a technology which allows a user to interact with a computer-simulated environment, be it a real or an imagined one. Working together—tactile, visual, auditory, olfactory, and gustatory senses all help us understand the world around us, and the effect our actions have on this world. Computer-generated information serves as a substitute for our five senses and tricks the brain into believing that we are in a completely different environment. The end result is what we call a “Virtual Reality.”

What makes virtual reality important is not that it is an emerging technology. There are many new technologies. Virtual reality, however, will influence the way humans interact in the world. The essence of humanity revolves around social interactions. Think about that… Every 60 seconds, 138,000 million emails are sent around the world. 239,000 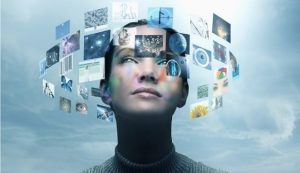 update their status on Facebook, 67,000 photos are uploaded onto Instagram and 433,000 posts are sent out on Twitter—all of which are rooted back to a human desire to connect with other people. Virtual reality takes this core part of who we are to another level because, through VR, how we interact with the world and other people fundamentally changes. Imagine meeting a friend living in Puerto Rico or Jamaica on a virtual beach, with real-life avatars. Likewise, people with disabilities could find more possibilities in an accessible virtual realm. Also, those who are unable to travel (due to financial constraints etc.) may find ease, knowing that virtual travel is a cheaper option. Virtual Reality will continue to push humanity along its evolutionary path enabling easier connectivity.

Most people are unaware of the fact that additive manufacturing technology is not new process and has been around since the Reagan era. In 2009 when the Fused Deposition Modeling (FDM) patents expired, 3D printing became such a popular topic that many people easily believed that it was a brand new innovation. It also gained such a wide media coverage because people often imagined that FDM was the only additive manufacturing technique, even though the stereolithography technique was patented in the 1980s. Here is a quick timeline of the history of 3D printing to today.

The foundation for 3D printing was load when Hideo Kadama created a functional rapid prototyping system. This system used photopolymers (a type of polymer that changes its physical properties when exposed to light), where a solid printed model was built up in layers.

Charles Hull invested stereolithography, which let designers create 3D models and later realistic objects by using digital data. In 1992, Charles Hull’s company (3D Systems) created the world’s first stereolithographic apparatus machine, which made it possible to fabricate complex parts, layer by layer, at a more efficient pace. These machines weren’t perfect in their beginning stages, but the potential they possessed was undeniable.

This was a great time for 3D printing in the medical sense. In just 10 short years, scientists from different institutions and start-ups fabricated a functional miniature kidney, build a prosthetic leg with complex component parts that were printed within the same structure, and bio-printed the first blood vessels using only human cells. 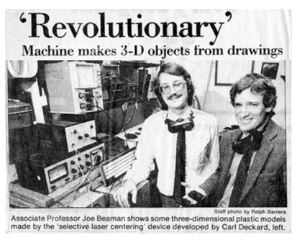 The first SLS machine became commercially viable in 2006, which made it easier to manufacture industrial parts on demand. Also, the barriers of entry for designers and investors started to dissipate once collaborative co-creation services such as Shapeways, a 3D printing marketplace where designers can get feedback from consumers and other designers, and Makerbot, which provided open-source DIY kits for makers to build their own 3D printers and products.

Today the price of 3D printers has rapidly decreased and the accuracy of 3D printing has improved, where innovators are pushing the envelope in ways that Charles Hull could only image.

3D printing hasn’t reached its limits and with future generations there is much it has yet to offer. With every new project, amazing stories are just waiting to be written…

For more information on 3D printing, see Chantal’s post 3D printing 101 – an introduction, that appeared on Library Matters in January 2017.