The David Collection is a museum of fine and applied art in Copenhagen, Denmark, built around the private collections of lawyer, businessman and art collector C. L. David.

The Islamic works of art are presented from three different perspectives: Islamic art organized chronologically and geographically, Islamic art grouped according to material, and Islamic art presented in its cultural context.

The objects are categorized into eight different groups. This makes it possible to see how both stylistic features and techniques were developed within a specific medium both over time and across geographical borders.

Focusing specifically on the cultural background for art in the Islamic world, this section illustrates fourteen themes of special relevance. Each theme is illustrated with a selected group of objects, accompanied by an explanatory text.

Islam, the Religion \The Five Pillars of Islam \ The Prophet Muhammad \ Mecca and the Kaaba \ Sunni and Shia \ The Mosque \ The Religious Prohibition Against Images \ Symbolism in Islamic Art \ Islam in China \ Sufis \ Dervishes, and Holy Men \ Trade, Measures, and Weights \Mechanics, Astronomy, and Astrology \ Medical Science \The Art of War

The Palestine Poster Project Archives (PPPA) was created by Dan Walsh for a master thesis project at Georgetown University, stating that: “It is a work-in-progress.”

The Palestine poster genre dates back to around 1900 and, incredibly, more Palestine posters are designed, printed and distributed today than ever before. Unlike most of the political art genres of the twentieth century such as those of revolutionary Cuba and the former Soviet Union, which have either died off, been abandoned, or become mere artifacts, the Palestine poster genre continues to evolve. Moreover, the emergence of the Internet has exponentially expanded the genre’s network of creative contributors and amplified the public conversation about contemporary Palestine.

A unique historical repository of primary data on modern Palestine. Audiences who are interested in this rich, yet under-valued module of Palestinian cultural heritage, can have a better understanding of people who were engaged in the contemporary history of Palestine and recorded it in their graphic art.

According to PPPA a “Palestine poster” is defined in a five-part definition as any poster:

1) With the word “Palestine” in it, in any language, from any source or time period.

3) Published in the geographical territory of historic Palestine, at any point in history, including

4) Published by any source which relates directly to the social, cultural, political, military, economic or iconographic history of Palestine or Palestinian nationalism contemporary Israel

5) Related to Zionism or anti-Zionism in any language, from any source, published after August 31, 1897

The Liberation Graphics Collection of Palestine Posters, which was Nominated to UNESCO’s Memory of the World Program 2016-2017, is a subset of the more than 11,500 posters featured at the Palestine Poster Project Archives web site.

The PPPA is an educational site and does not engage in any commercial or merchandising activities. Posters’ duplicates are frequently traded with private individuals as well as other archives and libraries. Furthermore, The PPPA has a strict policy concerning poster’s removal, as it will never remove a poster from its site. There is a dedicated link on the website for poster submission. Last but not least, the FAQ provides a deep insight into the core objectives of the archive, as it comprehensively answers a wide range of questions, it is worthwhile checking.

OPenn contains complete sets of high-resolution archival images of cultural heritage material from the University of Pennsylvania Libraries and other institutions, along with machine-readable descriptive and technical metadata.

All materials on OPenn are in the public domain or released under Creative Commons licenses as Free Cultural Works. Materials are free to download and use under the license assigned to each document. OPenn encourages that whenever possible, to cite the website and the holding institution when material are used. Many of the manuscripts on OPenn were digitized through grants and awards from public and private donors.

The data on OPenn is intended for aggregators, digital humanists, and scholars. Many of the images here are available via more user-friendly page-turning applications on institutional websites. OPenn regularly adds new repositories and new documents in order to bring more data to the public. Check back often to see what’s new.

The following example is taken from Columbia University, Rare Book & Manuscript Library, one of the housed repositories on OPenn. 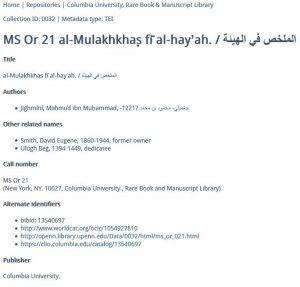 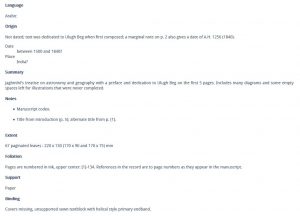 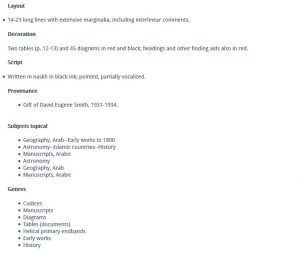 Documents: the images of these documents are accompanied by detailed manuscript descriptions in machine-readable TEI format.

Images: there are three types of images  are delivered for each manuscript element. 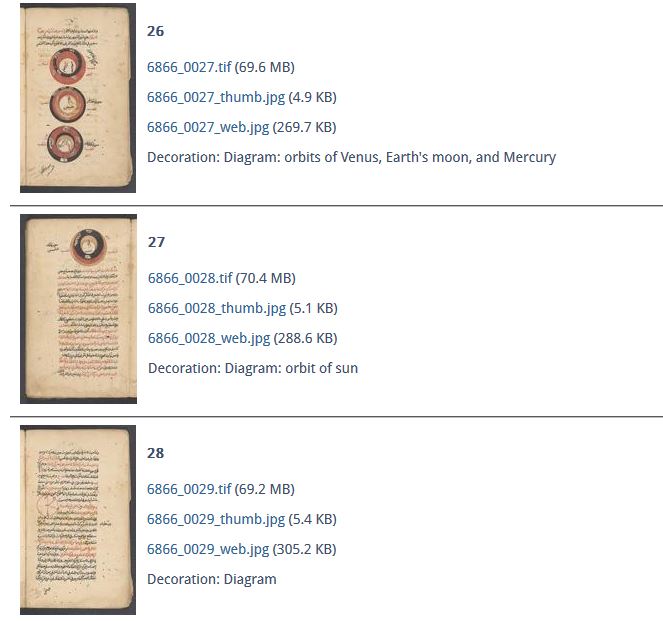 An OPenn repository is a group of documents belonging to a single institutional collection, all having the same metadata format. OPenn hosts 40 repositories from different institutions, including the University of Pennsylvania several repositories. 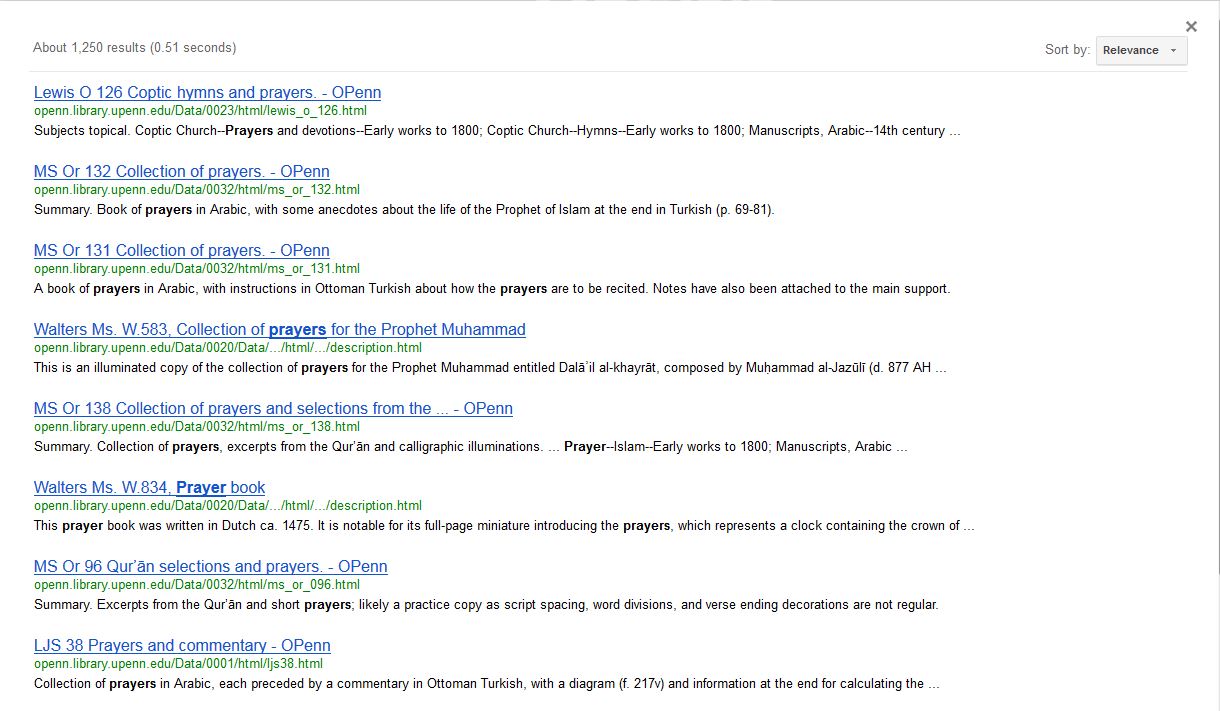 For additional information concerning licenses and use, citation style, alternate access methods and other technical stuff are all available in the OPenn: Read Me.

Afghanistan Digital Library is an open access Library for Afghan publications from the period 1871–1930. The project’s long-term objective is to collect, catalogue, digitize and provide access to the first sixty years of Afghanistan’s published cultural heritage.

“Afghanistan’s legacy of publishing is in clear danger of disappearing. The earliest publications appearing in Afghanistan are extremely rare and, judging by their absence from library collections around the world, are to be found now almost exclusively in private collections, where public access is limited or non-existent. Decades of war in Afghanistan have further dispersed and destroyed holdings of books within the country itself.” 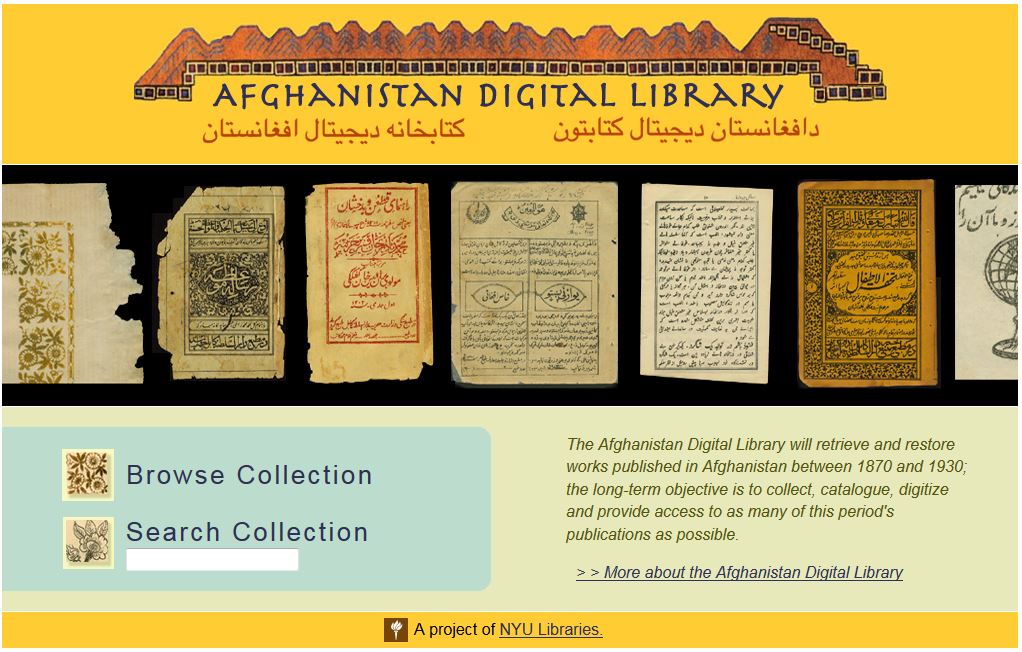 Phase 1 of the project started in 2005 and has drawn materials from the collections of several private collectors as well as from the holdings of New York University Library and the British Library. One year later, phase 2 of the project began. It has trained a staff at the National Archives in Kabul in conservation and digitization and has engaged in the cataloging and digitization of materials held in various public and private collections inside Afghanistan. 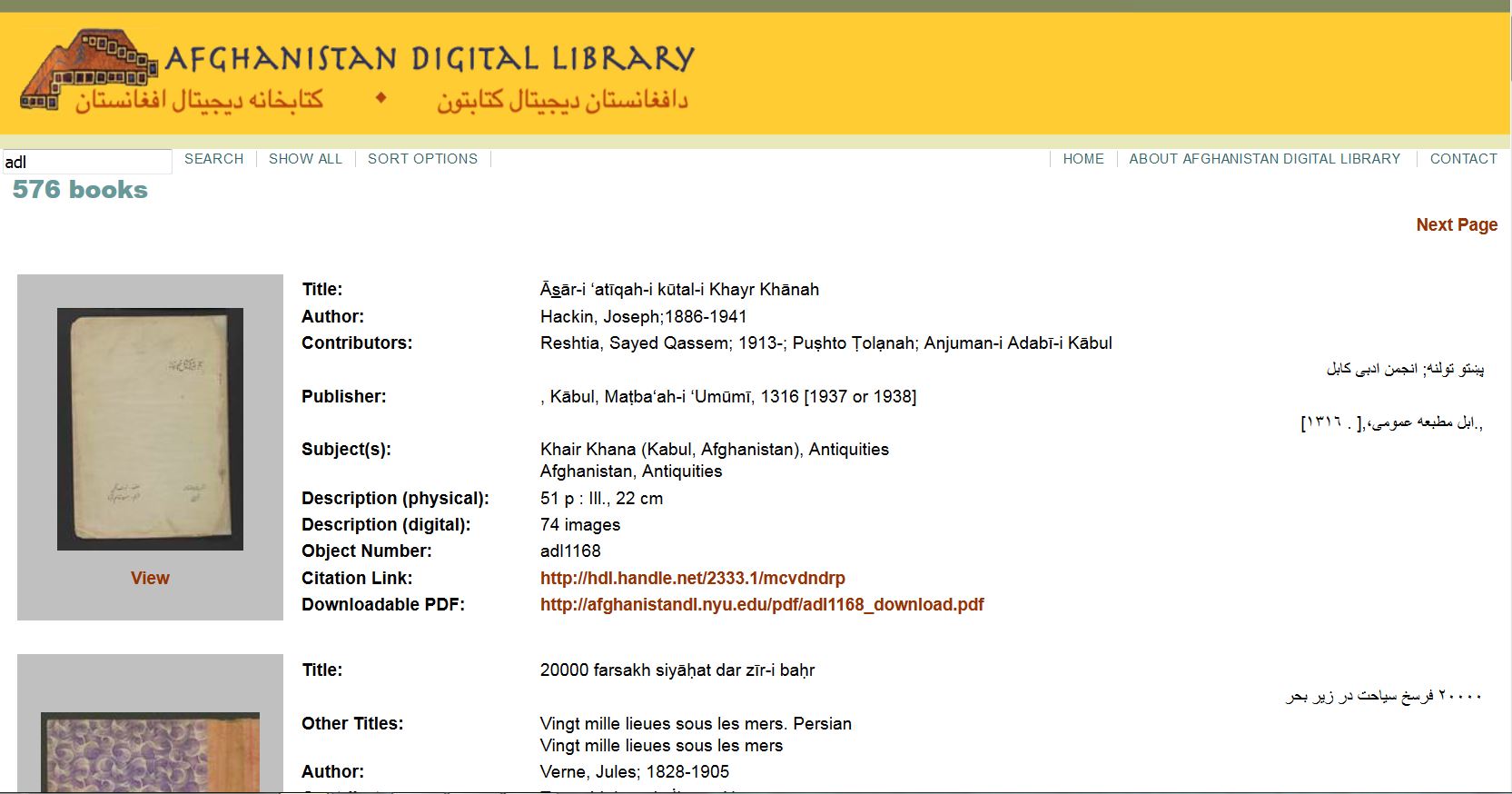 When Searching the Afghanistan Digital Library catalogue, it is good to know that the Search feature  is still in a pilot phase and they are working to optimize searching for the transliterated text on the site. If your search retrieved no results, browsing the collection is a better option to view what is available.

So far the library include Books, Documents and Newspapers, but eventually will include all published serials, pamphlets, and manuals.

The Afghanistan Digital Library is a project of New York University Libraries with the support of the National Endowment for the Humanities, The Reed Foundation, and the W.L.S. Spencer Foundation. 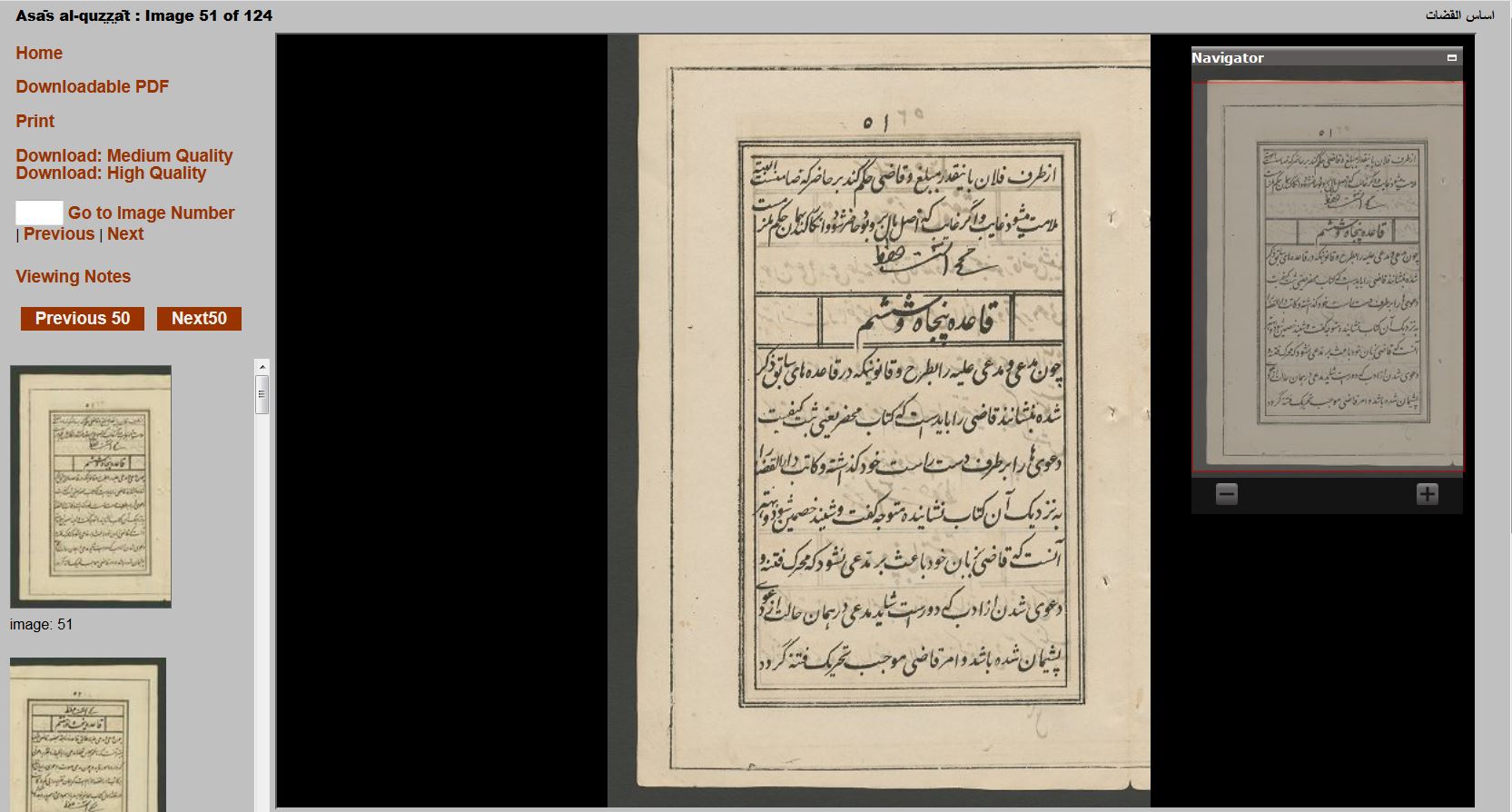 The images available on this website may be freely reproduced, distributed and transmitted by anyone for any purpose, commercial or non-commercial, unless otherwise indicated.