Earlier this week, a patron called the library asking about the publication procedure for Quebec legislation. He wanted to know whether the consolidated statutes and regulations published by Publications Québec on LégisQuébec were actually consolidated and up to date, and included any amendments soon to come into force. Specifically, he was seeing some inconsistencies with the Consumer Protection Act.

My initial response was affirmative – after all, the consolidated legislation on LégisQuébec includes an update date and has official status. If a bill amending the legislation had been passed prior to the update date, it would be reasonable to expect that the amendments had been integrated somehow into the official consolidated version. 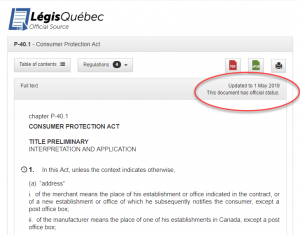 This expectation was reinforced in me in particular as a result of my experience regularly seeing gray boxes with the amended provisions and coming into force information integrated throughout official consolidated legislation. Consequently, I believed it was in error that the new section 119.1 of the Consumer Protection Act, introduced via section 27 of Bill 134 and set to come into force on August 1st, 2019 (order in council 987-2018), was excluded from the official, consolidated Consumer Protection Act. To that end, I sent an email to Publications Québec, asking them if this was an unintentional error.

The next morning, I received a phone call from a representative of Publications Québec informing me that there was no error on their part. Rather, the absence of 119.1 from the consolidated act was the result of an editorial decision taken by Publications Québec years ago (and which was too complicated to explain in writing, and better explained verbally).

In sum, I was told that despite the signs that led me to believe that the consolidated legislation published on LégisQuébec does integrate amending legislation not yet in force, in fact, Publications Québec does not integrate all amendments brought in by a new law. This is true even if an order in council has been published in the Gazette officielle du Québec proclaiming the coming into force of the various provisions of the amending law. Confusingly, Publications Québec only integrate SOME amendments.

According to the representative from Publications Québec, an amendment will only appear in a gray box if it modifies a provision currently in force and its coming into force date has been published; anything that is entirely new law will not appear in the consolidated law until it actually comes into force. The justification for this editorial decision? (1) To reduce the number of gray boxes that appear throughout the consolidated legislation and improve the readability of legislation. (2) To minimize the risk of integrating amending provisions that would end up never coming into force.

According to the representative from Publications Québec, there is no plan to change their editorial process. What this means concretely, is that: